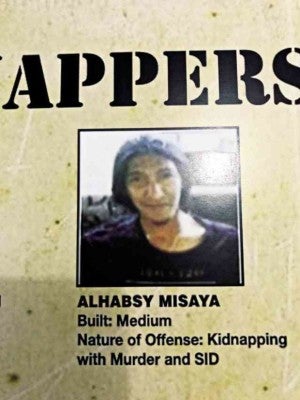 ZAMBOANGA CITY — An informant, who reportedly helped the military in last month’s operation in Sulu, which led to the death of Abu Sayyaf leader Alhabsy Misaya, received a P1 million cash reward on Friday, Maj. Gen. Carlito Galvez, the commander of the Western Mindanao Command based here, said Saturday.

Galvez clarified though that the reward money did not come from government coffers but was from “a group of Suluanos.”

“A reward was voluntarily generated by concerned individuals from Sulu, who were elated at the confirmation by the (Joint Task Force Sulu) of Misaya’s death,” he said.

Misaya, who was involved in the attacks on foreign vessels and kidnappings of foreign crewmen in the sea borders of Mindanao and Malaysia, was killed in Indanan town on April 28.

Galvez said the identity of the tipster and of the group that raised the reward would not be divulged.

Considered a bomb expert, he was tagged behind the October 2002 bombing in Barangay Malagutay here, which killed US serviceman Sergeant Mark Jackson Mark and wounded another US serviceman and 22 others.

He was also linked to the January 2009 bombing of a bridge in Indanan and the March 2011 explosion that killed four people and wounded 11 others in Jolo town.

Misaya was also involved in several kidnapping incidents the Abu Sayyaf has pulled off, including the abduction of seven Indonesian seamen off Simisa Island in Sulu on June 22, 2016.

Galvez said the information that the tipster had provided was proven to be “crucial in the execution of the combat operation launched by the elements of the Philippine Marines Ready Force – Sulu against the Abu Sayyaf Group, leading to the death of Misaya, who was projected as the next potential leader of the Abu Sayyaf.”

“More than anything, I personally thank the asset for the information he has given and for risking his life.

This gesture is truly a manifestation of his love for his home province, Sulu and his intent of helping the place to be free from the terror brought about by the Abu Sayyaf,” he added.

Read Next
Variation on a theme of Sappho