A 3-cornered fight looms over who gets to be mayor 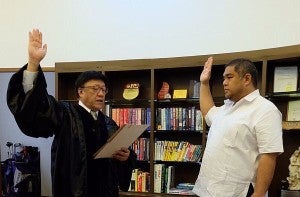 It is now a three-cornered fight for the mayoralty post in Bantayan town.

The tug-of-war for the position of mayor of Bantayan town between Mayor Arthur Despi and newly proclaimed Mayor Ian Christopher Escario has become a three-way pull as Vice Mayor Tony Montemar also wants to take over the post.

Montemar yesterday filed a quo warranto, a legal action challenging the right of a person to hold public office, against Escario, before the Regional Trial Court (RTC) in Bogo City.

“I listened to the advice of my lawyers and I realized that I also have the right to take over. I believe the new mayor should be determined through succession,” he told Cebu Daily News in a phone interview.

He said he is friends with both Despi and Escario and that he was not officially allied with either of the two during last year’s elections.

And although he was able to talk with Despi regarding the town’s current dilemma, Montemar clarified that the decision to file the petition in court was his own.

He said he does not want to “frustrate” those who voted for him during the last election by not doing something about the issue when he has the right to do so.

He, however, assured that whatever the decision of the RTC on his petition will be or if there is any other ruling from higher offices, he would follow it.

Montemar ran under the Liberal Party (LP) during last year’s elections although they did not have any candidate for mayor. Escario was with the National Unity Party (NUP) while Despi was a substitute candidate under the Abag-Promdi party.

However, the Commission on Elections (Comelec) declared as null and void the Certificate of Candidacy (COC) of Despi due to a technicality after his Certificate of Nomination and Acceptance (CONA) was disowned by Abag-Promdi, who said they did not endorse Despi as their candidate.

Comelec’s decision, which came out in May last year, was continuously questioned by Despi’s camp until it reached the Supreme Court (SC) which upheld the resolution of the Comelec and issued a Writ of Execution last week.

Yesterday morning, Escario was formally proclaimed by the Comelec Special Board of Canvassers (SBC) at their main office in Intramuros, Manila.

Escario said the activity started at around 10:30 a.m. but lawyers from Despi’s camp suddenly arrived at the venue and filed a motion to hold in his proclamation in abeyance, saying that they filed a petition for a Temporary Restraining Order (TRO) before the SC last May 3.

“My lawyer argued that since they could not show any TRO at that time, the proclamation should push through since it was scheduled by the Comelec,” Escario said.

The SBC briefly discussed the motion of Despi’s camp, but ruled in favor of Escario. The proclamation pushed through and Escario was declared the new mayor of Bantayan town as his hands were raised by the SBC members at around 10:45 a.m. yesterday.

He was accompanied by family, friends, and his lawyers.

Right after his proclamation, Escario said he went to the Court of Appeals (CA) to take his oath of office before CA Presiding Justice Andres Reyes Jr., whom he knew personally.

Asked about his plans, Escario said they will ask for certified true copies of all his documents first. He will then forward these to the Comelec and the Department of Interior and Local Government (DILG) in Cebu together with a letter from him as the newly proclaimed mayor.

“As the new mayor, we will ask the Comelec and the DILG to implement it. If he (Despi) will still not step down, he can sued for obstruction of justice,” Escario told CDN in a phone interview.

“We will let this go through the legal process. We are not in a hurry,” he added.

Sought for comment on the quo warranto filed by Montemar, Escario insisted that the rule of succession should not be observed in this situation.

He said that since Despi’s candidacy was considered invalid by the Comelec, he cannot be considered as a candidate. This is why he said it should be the losing candidate with the second highest number of votes that should sit as mayor.

Meanwhile, over at the municipal hall of Bantayan, it was like any other day.

“I attended the flag ceremony and the employees were expecting me to speak. I just told them it is a normal day,” said Despi.
There were also no reported rallies or gathering of supporters from either camp.

He said that he has no problem stepping down if it will be Vice Mayor Montemar who would take over. He said Escario cannot be made the mayor since he is a “repudiated loser.”

He said there has a Supreme Court decision which held that “not even this court (SC) has authority under the law to impose upon and compel the people to accept a loser as their representative or political leader.”

Despi cited another case, Domino versus Comelec, wherein the SC ruled that “the wreath of victory cannot be transferred from the disqualified winner to the repudiated loser.”