‘WATCH OUT FOR OIL’ 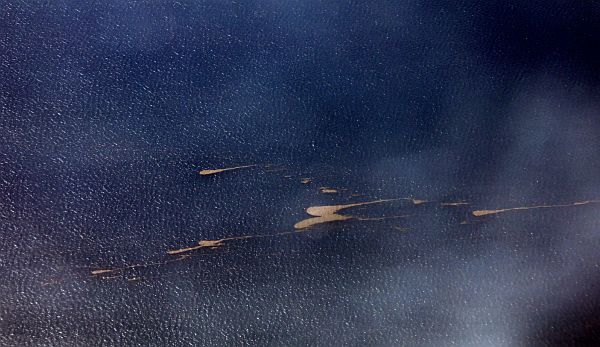 A photo taken on board a Philippine Air Force plane that flew near the site where the cargo vessel MV Fortuner sank shows the oil sheen that one city official said had spread beyond the area. Above, fishermen in Barangay San Roque, Talisay City headed by Julio Abapo (right) were anxious on hearing about last Sunday’s sinking due to fears of another spill that disrupted their livelihood nearly four years ago.
CDN PHOTO/TONEE DESPOJO and JUNJIE MENDOZA

‘No fishing ban yet but waters already ‘smell of gasoline’

With 10 family members to feed, fisherman Julian Abapo has more than enough reason to be worried about another possible oil spill in the waters off Talisay City.

(We are just worried because our livelihood will be affected again. We have no idea that there was a sea mishap until you informed us.)

Abapo referred to the ill-fated cargo vessel MV Fortuner that sank off the waters of Barangay Cansojong, Talisay City at 6:30 a.m. last Sunday.

Talisay City officials called on fisherfolk yesterday to remain vigilant as they monitor the situation.

So far there was no order for the fisherfolk to stop fishing in the area.

“We asked the fishermen to be vigilant in monitoring the sea since they are always in the site. Right now, what can be seen is a rainbow-like sheet on top of the sea, but it already smells of gasoline,” said Alvin Santillana, Talisay City Disaster Risk Reduction and Management Office (TCDRRMO) chief.

The 2013 collision resulted to an oil spill affecting Lapu-Lapu City, Talisay City and the mangrove areas of Cordova town.

Abapo said he and the fishermen had to avail of a cash-for-work program that paid P500 a day in order to survive since they were barred from fishing in the affected areas.

Last Sunday, Abapo and fellow fishermen went out to sea and managed to catch five kilos of fish that included danggit (rabbit fish) and kitong (siganus guttatus) which they sold at P200 per kilo.

Abapo said they had no idea about the oil coming out of the MV Fortuner owned by Seen Sam Shipping Inc. that sank off the waters of Barangay Cansojong.

Cebu Daily News visited Abapo’s small cottage yesterday afternoon near the shoreline of Barangay San Roque,and some of the fishermen prepared their motorbancas and fishing nets for the next trip despite knowing what happened.

Abapo said he wants to talk with Talisay City officials and officials of the Bureau of Fisheries and Aquatic Resoures (BFAR-7) so they would know what was being done to contain the oil spill.

Talisay City Councilor Antonio Bacaltos Jr. is also worried that the oil coming out of the sunken cargo vessel might affect the city’s largest marine sanctuary.

“They already smelled the odor of the oil and the oil sheen has reached beyond the sunken site,” Bacaltos told Cebu Daily News.

Lagundi Reef is a 2.4-hectare coral reef located 1.5 kilometers from Barangay Poblacion which was declared a marine sanctuary in 2005.

“So far, oil has not reached the shorelines of Barangay Cansojong and other neighboring areas. We encouraged the public to report to us if oil is spotted near their shorelines,” Bacaltos said.

Commander Ampil also confirmed that they accompanied a team from the EMB-7 that conducted a water study in the sunken vessel site yesterday morning.

MV Fortuner was loaded with iron and metal billets as well as 4,000 liters of special oil, a combination of bunker and diesel, when it sank last Sunday.

Commander Ampil said another set of divers were sent yesterday to assess the positioning of the vessel so they would know how to siphon the special oil.

They also met with the company officials to discuss about tapping a salvor company to salvage the vessel.

They already released a “Notice to Mariners” to warn the vessels passing by the sunken site to prevent accidents. The MV Fortuner sank 90 feet deep in the waters off Barangay Cansojong.

As of 3 p.m. yesterday, Commander Ampil said he still has to receive the marine protest of MV Fortuner’s captain Edilberto Isidro.
Without it, Ampil said they are in the dark over how and why the vessel sank.

The Coast Guard’s initial report stated that the midsection of the vessel’s hull started to crack at 4 a.m., two hours before it sank.
All 22 crew including ship captain Isidro were transferred to the company’s sister ship.

“The PCG Central Visayas will investigate and submit its report to headquarters for resolution,” Ampil said.

For his part Santillana said water samples near the site of the sunken ship have also been submitted to the city government’s agriculture department for testing.

Santillana said they are still waiting on the Coast Guard and the representatives of Seen Sam Shipping Inc., which owns the sunken MV Fortuner, for a meeting to coordinate any plans to deal with the vessel and the resulting oil spill.

He said the Talisay City government should be updated and involved in the resolution of the problem since the accident site is near the city.