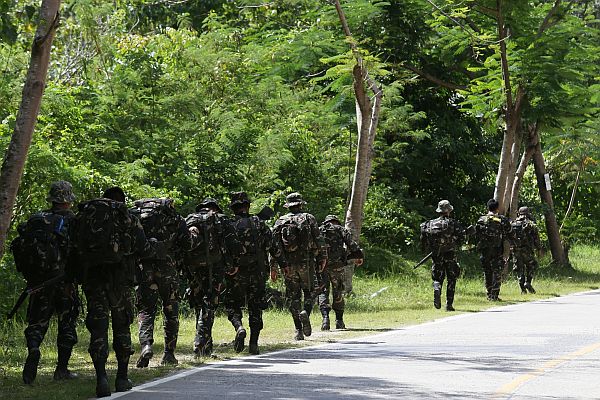 CLOSING IN. Government troops, shown here on foot patrol in Clarin town in Bohol province, are said to be circling Calape town where the two remaining Abu Sayyaf bandits are reportedly in hiding. Story on Page 31.
CDN PHOTO/JUNJIE MENDOZA

Driver constantly moving due to fears for own safety

Bohol — The habal-habal or motorcycle-for-hire driver who tipped off the authorities on the presence of the Abu Sayyaf Group (ASG) in Clarin town, Bohol is now fearing for his life.

A source who requested anonymity said the driver’s neighbors thought that he received at least P1 million from the government for providing information that led the military to the bandits’ hideout.

President Rodrigo Duterte earlier put a bounty of P1 million and the province pledged P100,000 more for each head of the Abu Sayyaf bandits who were being hunted by government troops.

But the driver only received P450,000 from the government, less than half of the promised reward money.

The source said the driver asked someone from Bohol who was known to be close to Mr. Duterte to inform the President that he was scared for his life after his neighbors thought that he was already a millionaire.

“He transfers from one house to another house out of fear that he might be killed,” the source said.

A source also gave a photocopy of the acknowledgment receipt hand-written by the driver that he received P450,000 from the government.

The one-page receipt described the driver as having been hired by an Abu Sayyaf bandit to bring him to Barangay Bacani, Clarin town, on April 22.
After he became suspicious of his passenger, the driver immediately reported him to the police who then informed the military.

The tip resulted in a clash that led to the death of Joselito Melloria, a native of Barangay Napo in Inabanga town who led a band of 10 Abu Sayyaf bandits into his hometown on April 10.

Aside from Melloria, three other Abu Sayyaf members were killed in the ensuing exchange of gunfire.

It was indicated in the receipt that the amount came from the province of Bohol and was given in the presence of Governor Edgar Chatto, Clarin Mayor Allen Piezas and some military officials.

Both Chatto and Piezas said they didn’t receive any call for assistance from the driver. “No one called me up or visited me at my office asking for help,” the governor said.

Those who witnessed the driver signing the receipt were Bacani barangay officials Victor Sanchez and Bernadette F. Junich.

The driver was interviewed by block timers but was not presented to media “for security reasons.”

Sources said the driver was brought to the Governor’s Mansion on April 29 to receive his cash reward which was followed by a press conference by Gen. Oscar Lactao, Central Command chief, as well as police, military and local officials.

The driver learned that the amount was only P450,000 after receiving his reward.

He was told by the officials not to tell anyone in order not to risk his safety.

He was also told that he was not the lone informant who received the reward since there were others who were part of the intelligence gathering of the police and the military.

The others included a mother and son in Barangay Bacani in Clarin who reported the presence of Abu Sayyaf bandits passing by the back of their house.

Another tipster was a resident whose phone was snatched by one of the Abu Sayyaf bandits and was used to contact Supt. Maria Cristina Nobleza and her husband, suspected Abu Sayyaf bomber Reenor Lou Dongon, for possible rescue.

Both Nobleza and Dongon were arrested when they refused to stop at a checkpoint manned by the Army last April 22 when government troops were pursuing the bandits.

In a text message, Lactao confirmed that it was not only the driver who received the cash reward from the government.

“I cannot discuss with you as this is classified. I assure you that rewards were given to informants with third parties as witnesses. It was properly documented and reports were made to higher authorities,” he said.

Asked if the soldiers who killed the Abu Sayyaf bandits were among those who received the cash reward, Lactao replied: “Support to units is different from rewards to informants.”

Gen. Arnulfo Matanguihan, commander of the Army’s 302nd Brigade who witnessed the turnover of the cash reward, said he didn’t receive any complaint from the driver or any of the informants on what they received.

Governor Chatto said they didn’t have a hand in the distribution of the cash reward and merely stood as witnesses.

“Lt. Gen. Oscar Lactao, commander of the AFP Central Command (Centcom), came to hand over the P1 million from President Duterte to the informers,” said Chatto in a text message.

Mayor Piezas said that like Chatto, he also didn’t know how much was given to the informant.

In last week’s “Kita ug ang Gobernador,” a local radio program of the provincial capitol, Chatto told media that “the bounty was based on the recommendation of the Armed Forces of the Philippines (AFP) and Philippine National Police (PNP).”

A Capitol official said while four Abu Sayyaf bandits were killed in the Clarin clash, the reward was given only for Melloria’s death.

Melloria was killed following a tip given to the military and police while the three others were slain in succeeding operations, the official who requested anonymity said.

The reward was already the combined bounty offered by both the province and President Duterte.

Both P1 million from President Duterte and the P100,000 from the province were given intact to the informers, a capitol official said.

The computation would also be used in releasing the reward to the informants that led to the arrest of Abu Sayyaf member Saad Samad Kiram, alias Abu Saad, in Tanawan, Tubigon town last May 4.

Read Next
Talisay seawaters safe for fishermen, but oil should be siphoned off vessel