TRASH DISPOSAL COST TO RISE TO P300M IN CEBU CITY 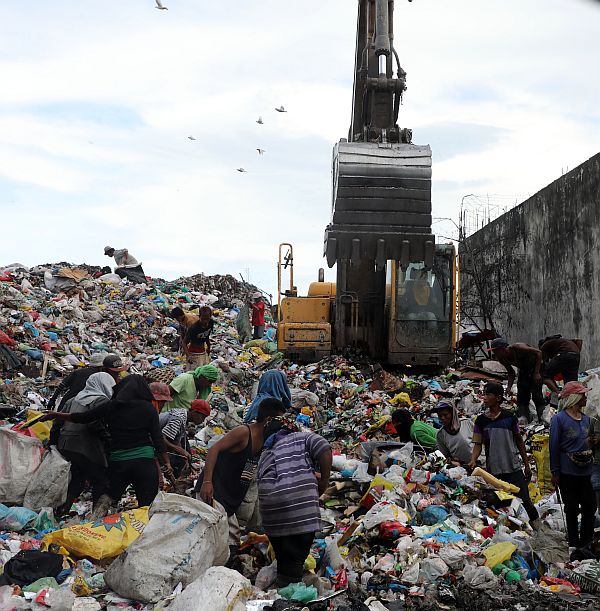 The hundreds of tons of garbage piling up daily at the Inayawan transfer station are an eyesore to many but for the city’s scavengers, they bring in their next meal as they sift through the trash looking for recyclables that they can still sell to earn a living.
CDN PHOTO/TONEE DESPOJO

Cebu City’s spending on garbage disposal is now projected to breach the P300 million level before the year ends.

The staggering amount will be more than twice the P135 million that was spent by the previous Rama administration, for which then mayor Michael Rama was heavily criticized by now Mayor Tomas Osmeña.

The rising cost to haul and dispose of the city’s garbage alarmed some councilors allied with Team Rama amid a new request for another P174 million from the Department of Public Services (DPS) to cover the garbage hauling fee for the second half of this year.

If the city council approves the additional budget request, the city government will be spending a total of P316.8 million on garbage hauling for the entire year of 2017.

The amount is on top of another P50 million being requested by DPS for rental of compactor trucks over the same period, as well as other city expenses in buying sardines for the “Basura Mo, Sardinas Ko” project to encourage proper trash disposal.

The city government has previously paid P25 million to private hauler Jomara Konstuct Corp. as garbage hauling fee for January this year. Another P77.8 million was allocated for February until April, which was paid to the same company.

The latest approved budget was P40 million, covering the months of May and June, also paid to Jomara.

DPS head Roberto Cabarrubias explained that they have projected a daily garbage generation average of 700 tons from July to November.

By December, they expect it to be at 800 tons per day due to more activities with the Christmas season.

“We will have it included in the city’s supplemental budget. We already submitted our proposal to the City Budget Office, but there is still no schedule as to when it will be submitted to the Cebu City Council,” Cabarrubias said.

The computation is also based on the city’s current contract with Jomara Konstuct Corp., which collects P1,350 per ton of hauled garbage from the city government.

Based on these estimates, the city needs P141.7 million for the months of July until November and another P32 million for December.

“Honestly, upon hearing that amount, it’s quite alarming. That’s only half of the year. So meaning we are spending P300 to P400 million for garbage alone for the entire year,” he told Cebu Daily News when sought for comment on the proposed new budget request from DPS.

Daluz said he would want the DPS to explain to the city council how the previous budget allocations were spent and why there is a huge jump in expenses for garbage disposal in the city.

Councilor Edu Rama also said he wants a thorough discussion on the proposal.

“That has to be discussed. The budget is quite big considering how much the city has already allocated before. I think it would be better if the proposal is included in the agenda as soon as possible so that it will be deliberated and we can see if it is reasonable or not,” he said.

The sardines did it

DPS assistant head John Paul Gelasque earlier explained that one of the reasons for the increased garbage volume in the city was because more residents have been cleaning their surroundings and disposing their garbage properly, particularly in Barangays Lahug and Cogon Pardo.

These two barangays are the pilot areas for the city’s Basura Mo, Sardinas Ko program whereby DPS personnel give away a can of sardines for every plastic bag of garbage surrendered to them by residents, particularly those living in interior sitios (sub villages). The residents will get two cans of sardines if they dump into the garbage truck one sack of trash.

Prior to the implementation of the project, Gelasque said the city only recorded an average garbage generation of 600 tons per day.

But for Councilor Joel Garganera, it is obvious that the city’s garbage expense should become an issue of concern, particularly since Mayor Osmeña, then a candidate for mayor, was extremely vocal about accusing the Rama administration of entering into a disadvantageous agreement with a private landfill company for the disposal of the city’s trash.

As it turned out, the trash hauled by Jomara still ended up in the same private landfill located in Consolacion town in northern Cebu.

Under Rama, the city only spent P135 million for garbage disposal for the entire year of 2016.

Back then, some of the city’s barangays would directly dump their garbage at the private landfill in Consolacion for a tipping fee of P700 per ton.

The other barangays, mostly in the south district, would bring their garbage to a transfer station in Barangay Inayawan where a private hauler would bring it to Consolacion. This set up cost the city P1,500 per ton, including the tipping fees.

This was stopped by Mayor Osmeña soon after he assumed office on the ground that the city has no valid contract with the private landfill in Consolacion.

At the current set up, the city went through a bidding process for the hauling contract won by Jomara.

The rate was lower at P1,350 per ton of garbage hauled, but the overall cost turned out higher since it covered all barangays, including those that used to pay only P750 as tipping fee.

Aside from the additional garbage hauling budget, DPS’ Cabarrubias said they also included in their budget proposal another P50 million for the rental of compactor trucks.

The amount will be used to rent 15 compactor trucks also for the months of July until December this year.

“This will be used for the Basura Mo, Sardinas Ko program which will be expanded to also include other coastal barangays in the city,” he said.

Under the program, the DPS will visit coastal barangays including Inayawan, Basak Pardo, Basak San Nicolas, Mambaling, Duljo-Fatima, Pasil, Suba and Ermita to collect garbage from residents and exchange them with cans of sardines.

Cabarrubias said Mayor Osmeña envisioned this project so that residents will be encouraged to help clean up their coastal areas in exchange for food.

Read Next
Preserve trees at all cost: Groups to BRT proponents