Sapangdaku school to be used anew for classes 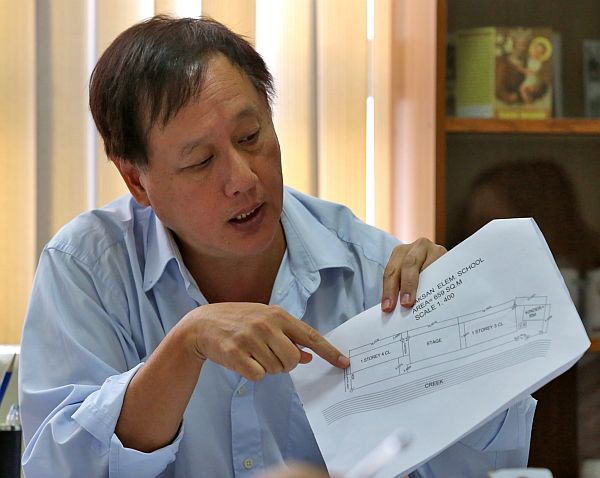 Cebu City Coucilor Joy Augustus Young, deputy mayor on Education, shows a site plan of the closed Sapangdaku Elementary School as he meets with representatives of the Department of Education (DepEd) Cebu City division discussing the reopening of the school this coming June 5, 2017.
(CDN PHOTO/JUNJIE MENDOZA)

Cebu City officials will reopen the Sapangdaku Elementary School which was closed three years ago because of flooding.

Councilor Joy Augustus Young announced the reopening of the school after consultations with parents and officials of the Department of Education (DepEd) in Cebu City.

“We have to make an intelligent decision here as to the risk. Old people there said there weren’t really major incidents of flooding in the area,” he said.

The school, which is located beside the Sapangdaku River, was ordered closed by former Cebu City mayor Michael Rama in June 2014 due to “frequent flooding.”

Since then, classes of the more than 500 kindergarten and elementary students have been held at the Sapangdaku Barangay Hall.

Young, who is the deputy mayor on education, said the plan to reopen the school was brought about after he suggested that the students be transferred to the Guadalupe Elementary School considering the unfavorable conditions in the makeshift classrooms inside the barangay hall.

He said he asked the DepEd and the school officials to conduct a consultation with the parents regarding the plan.

It was during the consultation last May 19 that they found out that the parents wanted to use the old school again.

“One hundred percent of the parents really want to go back to the old school,” said Sapangdaku Elementary School Principal Babylin Palban.

She said aside from the poor conditions of the makeshift classrooms in the barangay hall, the parents are also concerned about the additional transportation cost if they transfer to Guadalupe.

Young said they target to reopen the school by the opening of classes in public schools on June 5.

He said city engineers are already repairing and clearing the old school which has eight classrooms.

Based on their initial agreement, only the Grade 4, 5, and 6 students, numbering 240, will use the classrooms in the old school.

The remaining kindergarten, Grade 1, 2 and 3 students will continue to have their classes at the barangay hall while the rest of the classrooms are being repaired.

For one, he said, it does not have a properly functioning fire exit.

“But we can address this by doing a monthly fire drill,” he said.

For his part, Engr. Wendell Tabar of DepEd Cebu City said they were already able to check the area of the old school and found no immediate problems.

“The school is safe. The riprap is still intact. There is no threat of water breakout,” he said.

Meanwhile, Young also gave an assurance that the city will continue to look for available lots near the the area where a brand new school building could be constructed for the barangay.

He said it is important to build a new school so that it can also include a public high school since the nearest high school, the Ramon Duterte