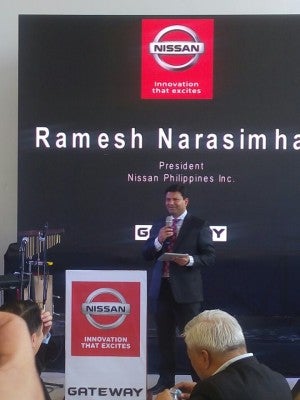 Since the birth of Nissan Philippines Inc. (NPI) in late 2013, the Japanese automaker has seen a drastic improvement in its sales in the country.

And according to NPI president and managing director Ramesh Narashimhan, the Cebu market has played a key role in the growth of the company in the past three years.

“Cebu has been an important part of our growth story,” Narashimhan said during the grand launch of Nissan Cebu South of the Gateway Group in Talisay City on Thursday. “There are segments where we are offering products where Cebu has contributed quite a lot in terms of our growth. We have a very strong presence in Cebu.”

According to Narashimhan, the strong performance of the dealerships, like the one being run by the Gateway Group here in Cebu, is the reasons why the Nissan brand has been more visible lately.

“Nissan has had a substantial growth. Our dealers have helped us grow,” he said. “We’ve had a 134 percent growth in last two years and 48 percent growth last year. The Philippines is really a hot market for us.”

Still, Nissan has no plans of easing up its drive in the country.

“Our objective is to grow more than the growth of the market,” Narashimhan said.

In Cebu, the top performers for Nissan are the Almera subcompact sedan, the Navara NP300 pickup truck and the NV350 Urvan, according to Markane Goho, president of Gateway Group.

“We lead a number of segments in Cebu. Like we’re no. 1 in the pickup segment with the Navara. And the almera, too,” Narashimhan said.

The Nissan Cebu South also has a satellite dealership at the SM Seaside City Cebu.

On Friday, another Nissan dealership, which is of the Autocentral Group, will be opened in Cebu at the North Reclamation Are in Cebu City.