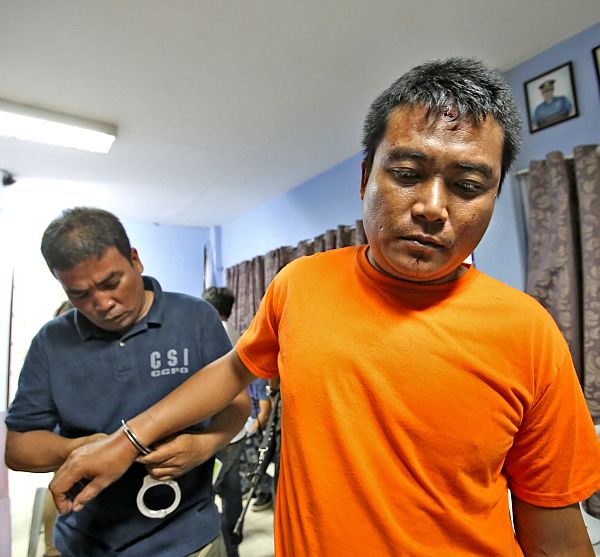 Archie Q. Ando (right), one of the suspects in the robbery-slay of Viscon Construction accountant Jennelyn Aquino, is handcuffed after he was presented to Police Regional Director Noli Taliño by Senior Supt. Joel Doria, Cebu City Police director. Ando works as a security guard of the Nextgen Security Agency, which has guards deployed at the Viscon Construction. (CDN PHOTO/JUNJIE MENDOZA)

A complaint for robbery with homicide was filed against the security guard who is one of the suspects in the robbing and killing of an accountant last Saturday at the South Road Properties (SRP) in Cebu City.

He was identified as the one who drove the motorcycle used as a getaway vehicle after accountant Jennelyn Aquino was robbed and killed near a construction site at the South Road Properties (SRP).

Four other suspects remain at large.

“We have personnel deployed in strategic areas like in terminals and piers to track down the remaining suspects,” said Senior Insp. Ryan Devaras, chief of the Investigation and Detective Management Branch of the Cebu City Police Office (CCPO).

Still on the run are Ando’s stepson Guillo Salinas Estudillo, Ariel Ando, a certain Elmer and a certain Tommy.

Ando tagged Estudillo as the gunman and identified his brother Ariel as the one who masterminded the robbery.

Ariel was an inspector of Next Generation (NextGen) Security Agency, which is also the employer of the 36-year-old Archie.

“He has been texting his friends, saying that he wants to surrender,” said Devaras.

The victim’s father visited the Theft and Robbery Section yesterday for the filing of charges.

“They (victim’s relatives) are satisfied with the investigation, but they are really hoping for the arrest of all the suspects,” said Devaras.

The victim, an accountant of Visayas Construction (Viscon), had just withdrawn P700,000 in payroll money from a bank inside a mall when the robbers struck. NextGen security guards man the Viscon construction site.

Archie was arrested last Tuesday morning at his workplace in MEPZ 3 in Lapu-Lapu City.

Police were able to trace Archie through the plate number of the motorcycle the suspects used to escape after the robbery.

Among the items seized from Ando’s house in Barangay Lawaan Uno, Talisay City, were a .45 caliber pistol and a KG-9 machine pistol.