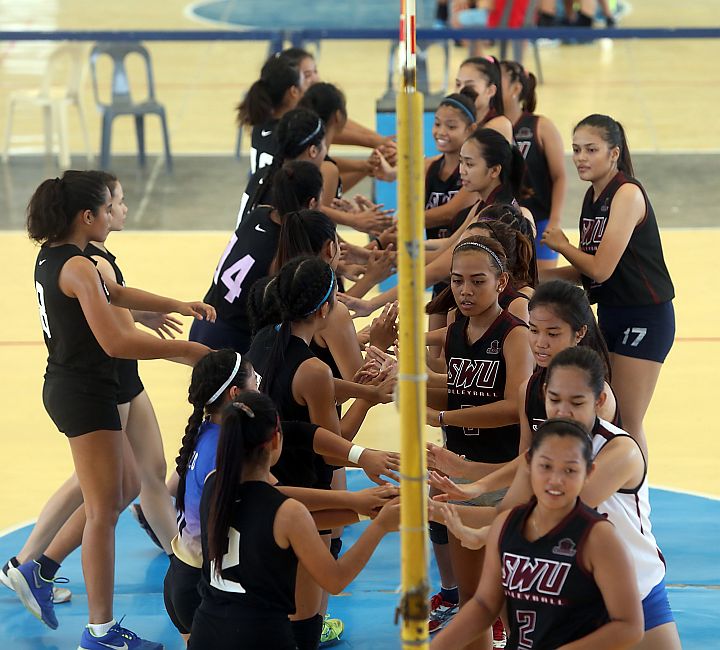 Players from the University of San Jose Recoletos (left) and Southwestern University greet each other at the net following their bruising semifinal match at the Shakey’s Girls Volleyball League at the SHS-Ateneo gym.
(CDN PHOTO/TONEE DESPOJO)

There’s an old saying that goes, when you get knocked down, you don’t stay down.

On Friday afternoon, bitter rivals University of San Jose-Recoletos (USJ-R) and the Sacred Heart School-Ateneo de Cebu (SHS-ADC) justified that saying as they both bucked opening set meltdowns to beat their respective semifinal foes and forge a final duel in the Shakey’s Girls Volleyball League-Central Visayas (SGVL-CV) leg in the Lux Oriens Gym of SHS-AdC in Canduman, Mandaue City.

The reigning Cesafi champions SHS-AdC dropped the first set against the University of Southern Philippines Foundation (USPF) but leaned on the heroics of star hitter Jennifer delos Santos who scored the last four points for the Magis Eagles including the game-winning spike for their, 18-25, 25-14, 25-22 victory.

“They were not intimidated by USPF and they showed great defense,” said Magis Eagles mentor Mario Sala. “We will increase our efforts and our defensive game in the finals,” he added.

However, the most inspiring performance of the afternoon came from the 2016 Cesafi finalist Baby Jaguars who did not only come back from a 0-1 deficit but also dethroned last year’s champions Southwestern University (SWU) Baby Cobras, 18-25, 25-20, 25-19.

After splitting the first two sets, the Baby Cobras seemed headed for an easy win when they took an early, 11-6 lead in the third. But the Baby Jaguars refused to fold up and unloaded an 8-3 bomb capped by a service ace by Janine Angob to tie the score at 14-apiece.

Another deafening 11-5 bomb by USJ-R formalized their titular showdown with the Magis Eagles, a team they manhandled less than 36 hours earlier.

“First set, the team was so relaxed so I told them that when they are on the court, they have to communicate,” said USJ-R assistant coach James Kelvin Lawas.

“We will try our best against Ateneo because they are a very strong team,” Lawas added.