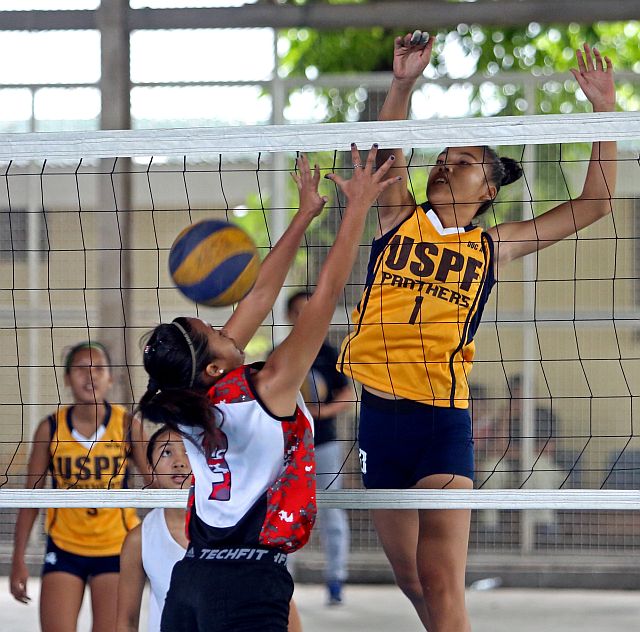 Mitzi Panangin of USPF spikes the ball against a player from ANS in yesterday’s semis. (CDN PHOTO/LITO TECSON)

The two squads will fight for the crown today at the same venue with USPF looking to stretch its dominance over SWU.

It can be recalled that USPF defeated the Baby Cobras in the 3rd Inter-Private Cup finals last April and in the battle-for-third match in the Shakey’s Girls Volleyball League earlier this month.

“We have to communicate and work as a team to be organized inside. We also have to condition ourselves in the finals,” said SWU mentor Roy Ulan.

Although USPF has a psychological advantage heading into another finals game against SWU, Baby Panthers mentor Yolanda Rizarri believes that they have a lot of work to do to win the title.

“SWU players are tall and we are very short, but I have to trust my players. Sometimes, you have to give them the freedom to do what they want inside because there are times when you yell at them, they get lost inside,” Rizarri added.

Meanwhile, SHS-AdC and the USPF-B will get things started today when they battle for third place at 8 a.m.

In his opening speech yesterday, tournament organizer Brian James Jereza surprised the six participating teams when he announced that he has already waived the registration fee which cost P2,000.

“I decided to waive the registration fee because I was really happy that a lot of teams joined even though the tournament was announced on short notice,” Jereza said.

Read Next
Pagara to meet Thai after Indonesian foe backs out