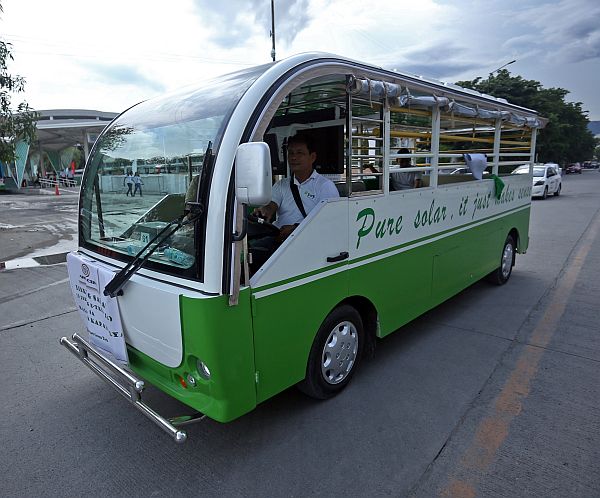 A demo unit of the solar-powered jeep is tested at Kaohsiung Street at the North Reclamation Area in Cebu City. Inset, Australian scientist Jacob Maimon sits a trike version of the eco-friendly vehicle.
CDN PHOTOS/LITO TECSON

Solar-powered vehicles will soon be plying in Cebu roads and transport groups will be getting them for free.

Australian company Star 8 Green Technology Corp. will be bringing in an initial 2,000 solar-powered jeepneys in Cebu as part of its partnership with the Department of Transportation’s (DOTr) public utility vehicles (PUV) modernization program.

Under the program, solar-powered vehicles will replace the existing PUVs.

“We will start soon. It’s a matter of two to three months before we can start. We have talked to our advertisers and we are just waiting for all the documents to be signed,” said Australian scientist Jacob Maimon, president of Star 8, in a press conference last Saturday at Bayfront Hotel, North Reclamation Area, Cebu City.

The 20-seater jeepney costs P1.4 million, while the 25-seater is worth P1.6 million. The vehicles are available in manual and automatic variants.
More factories

Apart from offering the jeepneys for free, Star 8 will also shoulder the vehicles’ maintenance cost. Star 8 will get its income from advertising.

“If we earn less, that’s on us. If we earn more, we will be opening more factories in the Philippines, including in Cebu,” said Maimon.

For now, the focus of the solar transport program is in Manila, according to Rolando “Bong” Laurel, Star 8 managing director. “But eventually, it will come to Cebu and other municipalities in the country.”

Star 8’s factory in the country is in Las Piñas City.

Maimon said bringing in the solar-powered vehicles in the Philippines is part of his advocacy to “help the country be green.”

“When I came to Philippines three years ago, I fell in love with the country and its people. This country has so much to give and I promised to help clean the Philippines and will start by having this environment-friendly vehicles,” he said.

The vehicles will get their power from either electricity or the sun.

The vehicles can actually be plugged in a regular household outlet to charge. For every full charge, the vehicle can run up to 16 hours or 120 kilometers. But it won’t run out of power that easily since it also charges itself while under the sun.

“If we have good sun, [there’s] no need to charge. The good part is, our system doesn’t need a special charging station. That’s the biggest problem for some electric vehicles,” said Maimon.

The solar-powered jeepney has overhead fans for each passenger and is equipped with television sets.

Though transport groups will be using the vehicles for free and they don’t have to spend for fuels, fares will still be collected.

Laurel said the Land Transportation Franchising and Regulatory Board will regulate fare matrix for the solar-powered vehicles.

Maimon assured there will be no exorbitant fares.

Maimon said Star 8 is assembling jeepneys that can withstand floods.

Marshals will board the jeepneys to secure the passengers and assess the driving habit of the driver, Laurel said.

Maimon is hoping that the Land Transportation Office (LTO) will fast-track the vehicles’ registration.

Aside from offering the free use of the vehicles, Star 8 will also be providing solar-powered foodcarts for the spouses of the drivers for more livelihood.

“We are for modernization and upgrade of our transport system. We are hoping for a good partnership with Star 8,” said Yu.

Read Next
Mastermind in lawyer’s ambush presented to media