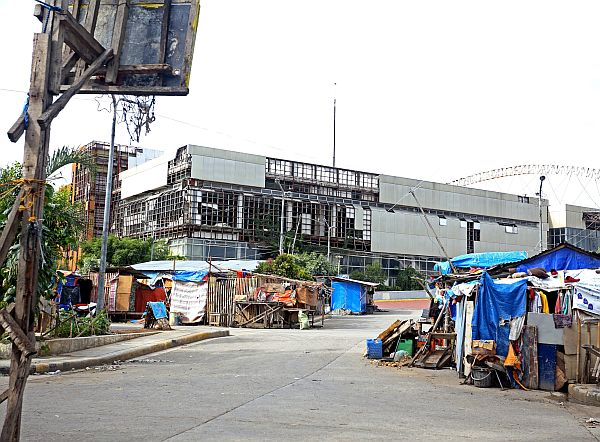 The Cebu International Convention Center is now a decrepit structure badly needing repairs (left), with its grounds now used as a temporary evacuation center of Mandaue fire victims. The convention center’s sorry state is a far cry from its heydays when it was Cebu’s prime venue (below) for international meetings.

How can the Cebu International Convention Center (CICC) bring back its luster?

The convention center that once brought pride to Cebu close to a decade ago is now an abandoned and worn out structure with its grounds now used as a temporary evacuation center of Mandaue City fire victims.

The once proud building situated in a 3.8 hectare lot in the heart of the Mandaue’s North Reclamation Area is nothing but a shell of itself during its glory days nearly a decade ago.

The CICC is considered as one of the catalysts that drove the growth of Mandaue’s NRA, alongside homegrown shopping center Parkmall and the Cebu Doctors’ University.

Its star started shining brightly and putting the spotlight on the area after it successfully hosted the 12th Asean Summit in 2006 and the 2nd East Asia Summit in 2007.

Since then, the CICC has been the venue of big international events.

It was during the term of former governor and now Deputy House Speaker Gwendolyn Garcia that the three-storey structure was built, costing the Cebu provincial government P800 million for its construction.

Situated in one of the busiest areas of Mandaue City, the building has a gross floor area of 28,000 square meters. It features an international media center, a large plenary hall that is able to accommodate 1,800 people, an exhibition hall, and several meeting rooms.

Despite allegations of corruption in its construction linking then governor Garcia and other government officials, the CICC continued to be the venue of international and local events until 2013 when nature struck it a double blow.

In October 2013, the CICC sustained damage after the 7.2-magnitude earthquake hit Bohol and Cebu.

Before any repairs could start, the facility was further damaged by typhoon Yolanda in November of the same year.

This was more than a year after July 31, 2012 when former governor Garcia and six other Capitol officials were charged with violations of Republic Act 3019 or the Anti-Graft and Corrupt Practices Act over alleged irregularities in the construction of the CICC.

Believing it to be marred with corruption, Gov. Hilario Davide vowed in 2013, that the provincial government would never spend a single centavo from Capitol coffers on the CICC.

No repairs have been done to the CICC since 2013.

Mayor Luigi Quisumbing, in earlier reports, said that the city would buy the facility for P350 million, with the payment set to be made in three tranches until 2019.

Quisumbing said he was not keen on spending for the CICC once the city would acquire it and would rather have it put up for a possible Public-Private Partnership (PPP), adding that he would rather see it operate as a convention center or commercial development to generate income for the city.

Roy Soledad, head of the Cebu Investment Promotions Office, said it would be best to keep the CICC as a convention center but improvements should be made on the structure.

“I think the priority should be a redesign. The whole building can be replaced or it can be retrofitted if still possible, rather than it being used as an evacuation center,” he told Cebu Daily News.

At present, the CICC grounds are being used as an evacuation center for fire victims in Mandaue City.

Soledad said that from a business perspective, he sees a lot of potential in the property, especially since many establishments have risen adjacent to and around it in the last 10 years, including malls, hotels, car dealerships, and tertiary hospitals, among others.

“But most importantly, it’s hard when we don’t have a property such as this to call our own, whether the city or the province owns it,” he said, adding that the CICC could have been Cebu’s version of Manila’s Philippine International Convention Center (PICC).

Without the CICC, the only possible venues for huge conventions are city hotels as well as the International Eucharistic Congress Convention Center Cebu (IEC).

Rowena Montecillo, former regional director of the Department of Tourism in Central Visayas (DOT-7), earlier said that the province would need more convention centers if it would want to sustain its performance as a destination for meetings, incentives, conferences, and exhibitions (MICE).

Cebu hosted some meetings of the Asia-Pacific Economic Cooperation (APEC) Summit attended by over 3,000 delegates from member economies in 2015. The 51st IEC was also held in Cebu City in January 2016 with more than 10,000 religious leaders and faithful from the Philippines and all over the world attending.

Neal Carlson Co, president of Parkmall, recalled how his shopping center, the CICC, and CDU were the three big developments at the NRA.

“Parkmall is doing well while CDU has a healthy student population and vibrant environment them. We also hope that CICC will come back to its original luster,” he said.

Banking on the initiatives already undertaken by the Mandaue city government, Co said he sees that the CICC will be able to bring a positive impact to the locality.

“There will be more events and more conventions since the original vision was for it to be used for the Asean Summit. Maybe we can do it again and showcase ourselves to the international market,” he said.

For Mandaue Chamber of Commerce and Industry (MCCI) president Glenn Soco, the interest of the Mandaue City government to buy the CICC from the Capitol was a “workable idea” since it is an arrangement between both local government units.

Meanwhile, he also suggested that the government should also involve the private sector in its planning and operations.

“It should be made as an economic enterprise and solicit proposals from the private sector to achieve the best arrangement for the government,” said Soco.

Soco added that if the property is properly used, it will have a major impact on Cebu’s growth, especially since it is one of the most prime pieces of real estate in the province.

The Mandaue City Council has already given Mayor Quisumbing the authority to purchase the CICC from the Capitol. Quisumbing, speaking to reporters during his State of the City Address (SOCA) this week, said that the ball is now with the Cebu Provincial Board (PB).

Meanwhile, the PB is also set to discuss the matter during its regular session on Monday.