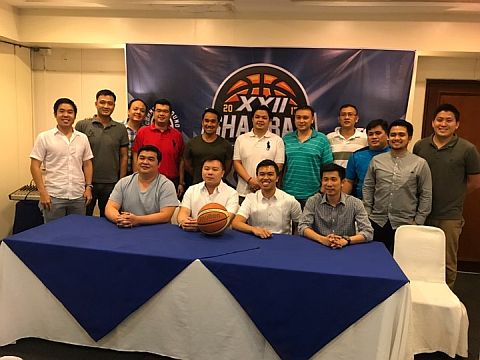 SHAABAA board members and representatives of participating teams gather during the launching at the Cebu Country Club.
contributed photo

The 22nd season of the Sacred Heart Ateneo Alumni Basketball Athletic Association (SHAABAA) will kick off this Sunday with a nine-game bill at the Magis Eagles Arena in Canduman, Mandaue City.

The tournament was launched yesterday in a press conference that was attended by league president Kevin Lim and league board members, Franco Soberano, Regan King and Clement Gothong. Also present were representatives of the competing teams that now number a record 27.

“We are glad to announce the opening of the longest-running alumni league in the Visayas,” Lim said. “Last year, we opened a new division: Division C for the solid teams of the newly graduated batches. We are proud to announce that from seven teams last year, this season, Division C already has 12 teams, thus giving the defending champions 2007 a run for their money.”

“The grit and grind bracket, Division B, that consists of the higher batches, is now on its fourth year and still remains a very strong division with 11 teams this season. And lastly, our elite division, Division A, this division is made up of the best of the best of our alumni,” added Lim.

Division A meanwhile, will have the reigning champions Cebu Landmasters, Harley Davidson, Gaisano Capital and the Sacred Heart School-Ateneo de Cebu Team B.

“This year, we are welcoming the Ateneo de Cebu Team B Varsity as part of the division as an additional exposure to the student athletes and at the same time to toughen the division more,” Lim said.

The semifinals and the finals of these divisions will also be best-of-three affairs.

This season, the league has partnered with basketball boutique Common Ground, who will help manage the tournament and would provide comprehensive statistical coverage to the tournament.

In addition, an Alumni Football League was announced to encourage more alumni to take part of SHAABAA.