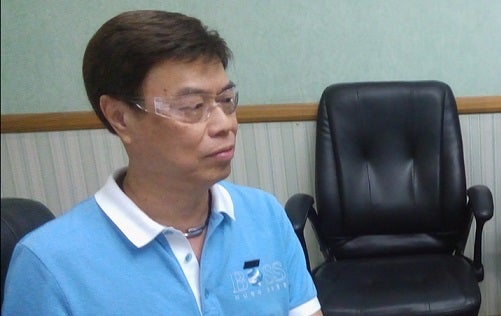 The Department of Justice (DOJ) and the Criminal Investigation and Detection Group in Central Visayas (CIDG-7) have started to go after Cebuano businessman Peter Lim, who was publicly identified by President Rodrigo Duterte as one of the country’s alleged biggest drug lords.

Supt. Royina Garma, CIDG-7 director, on Sunday said they were conducting complete background and financial investigation on Lim upon the order of his superiors in Manila.

He said a subpoena will be sent to Lim within the week, requiring him to personally appear before the DOJ, which is spearheading the investigation against the controversial businessman.

If there are enough evidence against Lim, appropriate charges will be filed in court against him.

The issuance of a freeze order to preserve the monetary instruments or property in the name of Lim that are considered to be in any way related to unlawful activities is also being considered by the CIDG, according to Garma.

Sought for comment, Lim’s lawyer Pedro Leslie Salva assured that they would cooperate in the investigation since his client had nothing to hide.

“He (Lim) is a plain businessman. He is definitely not involved in illegal drugs. But as it is, we will obey what authorities will ask of us. We respect our authorities,” he said.

The personalities who are being investigated by CIDG-7 are on the drugs list that was turned over by police intelligence officers to President Duterte last year.

So far, the CIDG-7 chief said they have discovered some questionable properties acquired by Sabalones, Derilo and Ylanan.

“I hope this will lead to the filing of charges against them. We have submitted our reports on these three personalities. It is all up to our superiors on what to do with them,” Garma told Cebu Daily News.

“There are no untouchables here. It is the people who are making them untouchable because of fear,” she added.

President Duterte earlier identified Lim as the biggest drug lord in the Visayas, while Rama and Loot were included in the list of so-called narco-politicians.

Rama and Loot had strongly denied the allegations.

Rama, in a phone interview yesterday, said he would welcome a CIDG-7 investigation if only to clear his name.

“It’s long overdue. Let them come to me, and I will talk to them,” he said.

Loot shared the same sentiments, saying it’s about time for all the allegations against him to be scrutinized as he is not involved in any illegal activities.

“I am open for any investigation. My life is an open book,” he said, also by phone, yesterday.

Loot said he was investigated by CIDG-7 as early as November 2016.

He said he was told that he was already cleared on three aspects: drug links, failure to implement the anti-drug programs in his municipality and unexplained wealth.

“I don’t know (if there are still other aspects in my life that they are looking into),” he said.

Sabalones’ lawyer Louie Arma also said they are pleased with the investigation conducted by the CIDG-7.

“Much better if they will investigate. That is a good venue to prove that my client is never involved in illegal drugs,” he said in a separate interview.

Derilo, for his part, declined to issue any statement, while Ylanan could not be reached for comment yesterday.

Cebuanos were later surprised that they were among the 200 policemen in Central Visayas who were transferred to Mindanao on suspicion that they were involved in illegal drugs.

Justice Secretary Vitaliano Aguirre II later claimed that the Lim then identified by the President was not the Cebu-based businessman but “Jaguar” Diaz, who was killed by Cebu policemen led by Ylanan and Derilo in an anti-drug operation in Las Piñas City on June 17, 2016, in coordination with the Las Piñas police.

But Garma yesterday said the Lim alluded to by President Duterte is the Cebuano businessman who owns several businesses in Cebu.

“There were issues that he’s not the one (referred to by the President), but it was eventually established that he’s the real Peter Lim,” she said.

Garma admitted they were having a hard time gathering evidence against Lim since people who had personal knowledge about the operations and transactions of the Cebu businessman were concerned for their safety.

She also pointed out that two former employees of Lim were killed several years after testifying against the businessman during the congressional inquiry on illegal drugs in 2001.

Bernard Liu and Ananias Dy detailed the businessman’s alleged involvement in illegal drugs during the congressional inquiry. Lim and his brother Wellington were later cleared.

Dy was shot dead by two unidentified men in July 2006 at the corner of Salvador and Katipunan Streets in Barangay Labangon, Cebu City.

Liu’s body was already decomposing when found in his house in Talisay City in September 2011. A rope was tied around his neck and crude oil poured over his body.

Garma claimed government offices in Cebu were uncooperative and had refused to release documents pertaining to Lim’s business transactions.

“We have overwhelming intelligence reports against him (Lim), but the problem is people are scared to execute an affidavit,” Garma said.

She said they found out that Lim enjoyed police protection for several years before he was publicly identified by President Duterte as a drug lord.

Based on their investigation, Garma said there were even policemen who were assigned to serve as Lim’s bodyguard.

“We got word that he (Lim) was so extravagant in dealing with (a) former (police) director. He was more than (business tycoons) Lucio Tan or Henry Sy when it comes to accommodating police officials in Cebu. He provides vehicles to them and gave them almost everything,” Garma said.

The police officials who were linked to Lim, she said, have been transferred outside Cebu.

Garma said they have requested the Bureau of Internal Revenue, the Bureau of Immigration and the Maritime Industry Authority for documents about Lim’s business transactions and travels.

But these government agencies, she said, refused to give the CIDG-7 Lim’s records due to confidentiality rules cited by the different offices.

“The President has announced his (Lim) name. All agencies of government should have cooperated already,” Garma said.

Let the truth be told

She appealed to witnesses to cooperate with authorities and help them in the investigation against Lim.

“I hope people who knows the truth will come out and cooperate. Law enforcers can’t do everything alone. We need the help of the community. Eradicating illegal drugs is actually a shared responsibility. If done by the police alone, we can never solve the problem. The community has to join us,” Garma said.

“Illegal drugs have caused our country so much damage. This is our last chance to address the drug problem in our country. I think we will never have another President who is as sincere in eliminating drugs. Let’s eliminate fear,” she said.

The CIDG-7 pronouncement also came hours after Ozamiz City mayor Reynaldo Parojinog, his wife and 11 others were killed in a series of raids conducted by CIDG operatives in the city’s Barangay San Roque Lawis predawn on Sunday.

Chief Supt. Timoteo Pacleb, the Northern Mindanao police chief, said the operatives simultaneously served six search warrants against properties of the mayor and other Parojinog family members for drugs and firearms when they were met with violent resistance at about 2:30 a.m. (story on page 2).