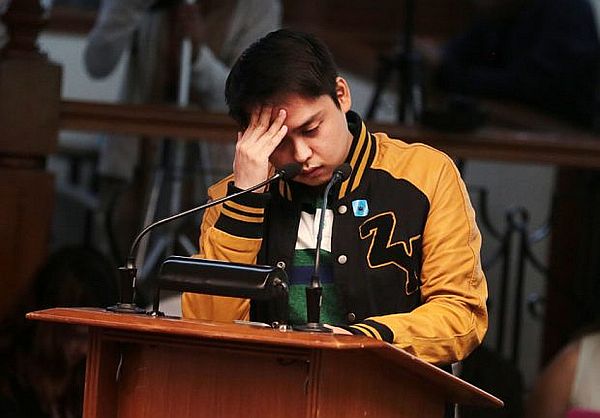 Private broker Mark Taguba II on Tuesday claimed that he paid as much as P1 million a week to the “Davao group” of the Bureau of Customs (BOC).

During the Senate Blue Ribbon Committee hearing on the P6.4-billion shipment of “shabu,” Taguba revealed that he met with Davao City Councilor Nilo “Small” Abellera in Davao to hand over P5 million in protection money, which they called an “enrollment fee.”

Taguba said he first met with a certain “Tita Nani” from the BOC in a Quezon City mall. He said Tita Nani instructed him to give an “enrollment fee” worth P5 million to the Davao group.

In January, Taguba said, Tita Nani sent her a text message saying: “Good am, Mark. We’ll make final arrangement with Jack, he’s the handler of Paolo, now we have to advance the enroll. He can fly down to Davao to arrange your meeting with Pulong ASAP. During the meeting, you personally turn over the P5M, in the same manner you likewise turned over the LMLN to Jack when we met.”

Taguba clarified that he did not personally meet the President’s son, Davao City Vice Mayor Paolo “Pulong” Duterte, but he said Abellera and Jack claimed that they were collecting money for Duterte.

However, after last week’s hearing, Blue Ribbon Committee chair Sen. Richard Gordon and committee member Sen. Tito Sotto said they believed that there was not enough evidence to prove that Vice Mayor Duterte had a direct involvement in the shipment of P6.4 billion worth of drugs.

Upon the instructions of Tita Nani, Taguba flew to Davao City. A certain “Jack” brought him to a restaurant to meet Abellera.

(Jack fetched me and brought me to a restaurant where we saw Small and there we talked about the P5 million. He (Small) told me before he gets the money that I need to arrange the weekly remittance.)

Every Friday, Taguba said Jack would fly back to Manila from Davao to collect money from him.

Taguba said since he started paying the enrollment fee and the weekly remittance, his container vans were never “alerted” by the Customs.

Abellera was summoned in the hearing, but he did not attend due to hypertension.