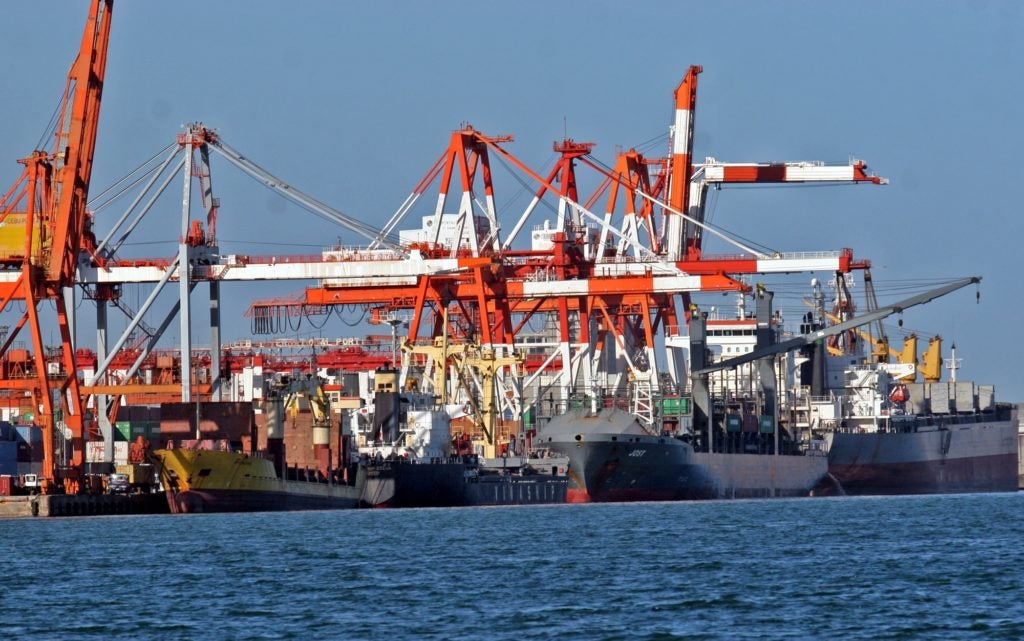 INTERNATIONAL cargo vessel MV Vinaship (second from left) from Vietnam unloads Vietnam rice at the Cebu International Port (CIP) in Cebu City in this file photo taken on February 20,2016. If Cebu City Mayor Tomas Osmeña’s suggestion is given weight, CIP, like other international ports in the country, should be transformed into freeports to eliminate corruption at the Bureau of Customs.
CDN FILE PHOTO

If only to end corruption at the Bureau of Customs (BOC), why not remove all tax levied on imported goods?

Cebu City Mayor Tomas Osmeña on Saturday said the government should stop collecting customs duties, and start to introduce the freeport concept across the country, including in Cebu, where goods coming in and out of international ports are exempt from customs duties.

“No more duties. Freeport. (BOC should) concentrate on banned items like drugs and explosives,” Osmeña told Cebu Daily News in a text message.

In the field of trading, the term “customs duties” is used to refer to the tax imposed on imported goods. This is just one of the means for the government to earn revenue, said the National Tax Research Center of the Department of Finance (DOF).

The BCDA also runs the Poro Point Freeport Zone in La Union province. The two other freeports are in Aurora province and in Zamboanga City.

“The SBMA manages and operates the SBF as a separate customs territory ensuring free flow or movement of goods and capital within, into and exported out of the Freeport. It has the authority to provide incentives such as tax and duty-free importation of raw materials, capital and equipment needed for the business operation within the Zone,” the information gathered from the SBMA website states.

All SBF-registered enterprises are exempted from national and local taxes. Instead, SBF enterprises pay a tax of 5 percent of gross income earned.

Outside of these freeports, imported goods valued at P10,000 and below are not subjected to customs duties, and they can be immediately released.

Otherwise, they have to undergo through this particular policy and their owners must pay the necessary fee before they can be distributed to different parts of the country, the DOF said.

In 2015, the Customs also began to impose tax on balikbayan boxes after their agency feared for individuals taking advantage of these duty- and tax-free packages as a way to smuggle imported goods and contraband items.

Osmeña, in the same text interview, said repeated incidents of smuggling resulted in an uneven distribution of wealth and should be stopped because “the rich are the smugglers and cheaters, and the poor are getting poorer.”

Osmeña said that he too has become a victim of the BOC controversy when he and former Cebu Customs collector Rico Rey Francis “Koko” Holganza were dragged into the smuggling into Cebu of 5,000 metric tons of South Korean wastes last January.

“I’m being dragged in this together with Koko Holganza. Koko was implicated in accepting a shipment of Korean garbage – he was no longer collector when the garbage was released. Defeated (Cebu) Gov. Gwen (Garcia) used an anonymous letter to smear our reputations. To me, it is ex-Governor Gwen that smells like garbage,” he said.

Cebu Daily News tried to contact Garcia, but she did not answer the calls. A text message sent to her was also left unanswered.

Garcia earlier filed House Resolution No. 1155, calling an investigation to “ferret out the truth” on the waste shipment to Cebu and to find out who are the individuals behind the illegal exportation.

Osmeña described as a “blatant lie” the allegation of a certain Felix S. Lopez Jr. who wrote to President Rodrigo Duterte that the mayor agreed that the garbage be dumped at the now closed Inayawan Sanitary Landfill.

Meanwhile, Mandaue City Chamber of Commerce and Industry (MCCI) President Glenn Anthony Soco said Osmeña’s suggestion to remove all tax levied on imported goods, and to create a freeport is a valid option to prevent corruption at the BOC.

“That can be an action that can be looked into, but it is also necessary to (counter) balance the proposal with the status of our country’s fiscal ability,” he said.

Soco, however, said that the proposal has to be carefully studied, citing that a large portion of the state’s revenue is at stake.

“Because we do understand that the Customs is the second biggest revenue earner of the country … money to be spent on government projects, services and infrastructures are derived from here so that has to be carefully studied,” he said.

Sen. Ralph Recto early this week, however, revealed that BOC has fallen short of its revenue targets.

The collection shortfall came amid allegations of widespread corruption in the bureau exposed by Sen. Panfilo Lacson who, in a privilege speech last Wednesday, revealed so-called “Tara” system where hundreds of million of pesos were paid to top Customs officials and personnel to turn a blind eye on the entry of not just goods but also illegal drugs smuggled into the country.

Soco said it is high time for public officials to shape up following the corruption uncovered in the BOC.

“While we are looking for options on how to reduce, if not eradicate, corruption in the Customs, it is important for people in the Customs to shape up especially now that there is a very, strong call for our President to stop corruption,” he said.

Melanie Ng, Cebu Chamber of Commerce Industry (CCCI) president, on the other hand, declined to comment on the mayor’s proposal in the absence of details about how these freeports should operate.

Meanwhile, President Duterte continued to stand by outgoing Customs commissioner Nicanor Faeldon even as the House committee on dangerous drugs prepared to recommend the filing of criminal and administrative charges against the former mutineer and his subordinates over the alleged “Tara system” of bribery at the BOC.

During a visit to Marawi City on Thursday, Mr. Duterte insisted that he would not tolerate corruption during his administration, and alluded to an exchange of accusations between Faeldon and Lacson.

“I still believe that Faeldon is honest,” he said.

Faeldon was among the people who convinced him to run for president three years ago, Mr. Duterte added.

He vouched for Faeldon’s integrity a day after Lacson accused the former BOC chief of receiving a P100-million payoff when he took over the bureau.
Faeldon hit back at the senator on Thursday, accusing Lacson’s son and namesake of involvement in cement smuggling and of attempting to bribe BOC officials.

At the House, committee on dangerous drugs chairman Surigao del Norte Rep. Robert Ace Barbers said they would recommend the filing of criminal and administrative charges against Faeldon and several other BOC officials, including Cebu Customs Collector Elvira Cruz, in the wake of the entry at the Manila port of P6.4 billion worth of illegal drugs last May that went past the BOC and after they confirmed the existence of the “Tara system” at the bureau.