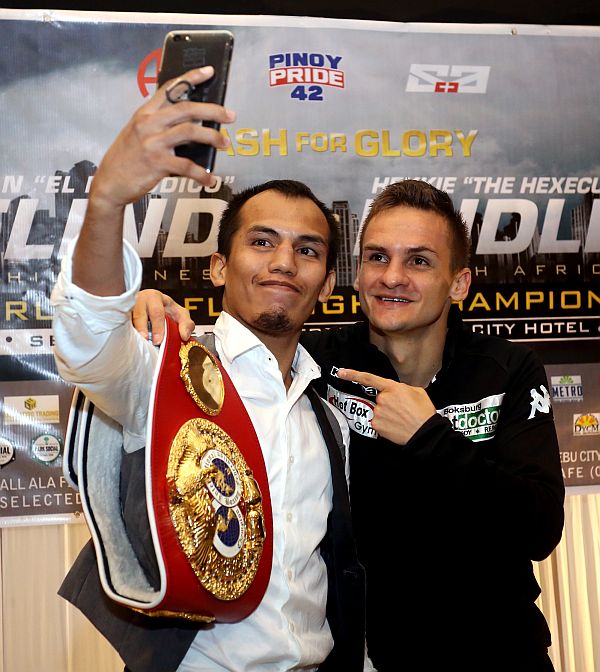 FIRST, LET’S TAKE A SELFIE. Milan “El Metodico” Melindo and Hekkie “The Hexecutioner” Budler pose for a selfie during their press conference at the Waterfront Cebu City Hotel and Casino on Thursday.
CDN PHOTO/LITO TECSON

The displaced people of the Islamic City of Marawi will be the source of motivation for reigning International Boxing Federation (IBF) world junior flyweight champion Milan “El Metodico” Melindo when he faces current IBO world junior flyweight champion Hekkie “Hexecutioner” Budler in the Pinoy Pride 42: Clash For Glory fight card on Saturday at the Waterfront Cebu City Hotel and Casino.

Melindo, who sports a 36-2-0 (win-loss-draw) record with 13 knockout victories, said he is dedicating this title-defense fight against the two-division world champion South African Budler (31-2-0,10KOs) to the people of Marawi who are mostly sheltered in evacuation centers due to the ongoing battle between government forces and Islamic militants which has been going on since May 23.

The 29-year-old Melindo, who hails from Cagayan de Oro, a city just 103 kilometers away from Marawi, said he wants to win to inspire the people of the war-affected Islamic City.

“I am from Cagayan de Oro City, which is near Marawi. So I really feel their situation right now. I hope that there will be peace there soon,” Melindo said in a pre-fight press conference yesterday at the Caspian Room of the Waterfront Cebu City Hotel and Casino. “I badly want to win this fight not just for myself but for the entire Filipino people and most specially for the people of Marawi.”

Melindo and Budler faced each other for the first time yesterday. Both were easy on each other but vowed to go all-out inside the ring.

“I believe that we both have hearts of a lion and we can make a great fight,” Budler, also 29 years old, said. “We just hope that we can give the people a good show. I consider this as the toughest fight, I am against one of the best fighter in the world. ”

Budler’s trainer Nathan Colin said tomorrow’s fight is important for his ward since there are only two world champions in South Africa. These are Budler and WBO bantamweight champ Zolane Tete.

“Like I said when we arrived, we came here to do one thing only and that is to win. Nothing more and nothing less,” said Colin.

The official weigh-in will be at 12 noon today at the SM City Cebu event center.