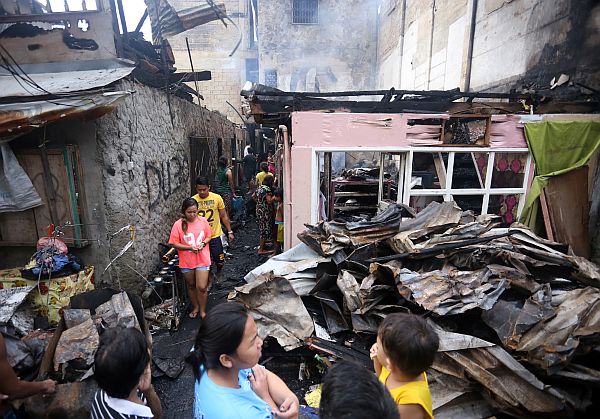 Residents of Sitio Sto. Niño check for their belongings at the fire site.
CDN Photo/Lito Tecson

The 104 families who were displaced by the fire that hit Sitios Sto. Niño and Missionary in Barangay Suba, Cebu City, at past 7 p.m. last Monday will be allowed to return to their respective lots.

Meriam Consuelo Fernandez, chief of Cebu City Hall’s Division for the Welfare of the Urban Poor (DWUP), gave this assurance saying that the fire sites are included in the city’s Slum Improvement and Resettlement (SIR) program.

“It is a government-owned lot. If it’s government property, we will allow them to go back. However, we have to see and survey again whether or not there is a need for reblocking,” she told reporters yesterday.

She said most SIR areas in the city only have foot paths and don’t have enough wide roads to allow vehicles or firetrucks to pass through.
Firefighters were unable to enter the fire sites due to the narrow roads.

In widening the roads leading to their homes, Fernandez said the settlers may have to allocate a portion of their lots to widen the road.

“We have to sacrifice to prevent another fire from happening. The tendency if there are no clear roads when it comes to disasters is we don’t have a way to enter the area,” she said.

Based on records of the Department of Social Welfare and Services (DSWS), at least 43 houses were damaged by the fire.

DSWS chief Lea Japson said they are still conducting profiling and validation of the fire victims.

Starting yesterday, DSWS distributed packed meals to the fire victims and would continue to do so until tomorrow.

After that, Japson said they will start handing out canned goods and disaster kits to the affected families.

“If it is determined if they can already go back and there is no need for reblocking, we will start giving them the housing materials,” Japson said.

Among the fire victims was 45-year-old Ernesto Laudico, whose 11-month-old son is afflicted with hydrocephalus.

Laudico was unable to save anything from his home since his family was at the hospital tending to his son.

The fire was supposedly caused by an illegal connection at the house of siblings Mario and Marife Espinosa that caught fire.

Suba Barangay Chairman Joel Sable said he warned the Espinosas thrice about tapping into the electrical connections of neighbors.

The illegal connection was set up by a certain Dondon Aragon whose sister, Zenaida Cabangca, admitted that he had no training to install wire connections.

“I hope that they (who are engaged in wire-tapping) will be caught. It’s so hard when you suffer because of their doings,” Laudico said.

Republic Act 7832 or the law penalizing the pilferage of electrical transmission states that violators will be sentenced to six to 12 years in jail or fined P10,000 to P20,000 or both depending on the court’s discretion.

Senior Fire Officer Pier Angelo Abellana of the Cebu City Fire Department said they invited Mario and Marife Espinosa and other residents of the area for investigation today.

The same spot has been struck by fire thrice with the first two occurring in 2002 and 2010.

The affected residents are being housed at the barangay sports complex.