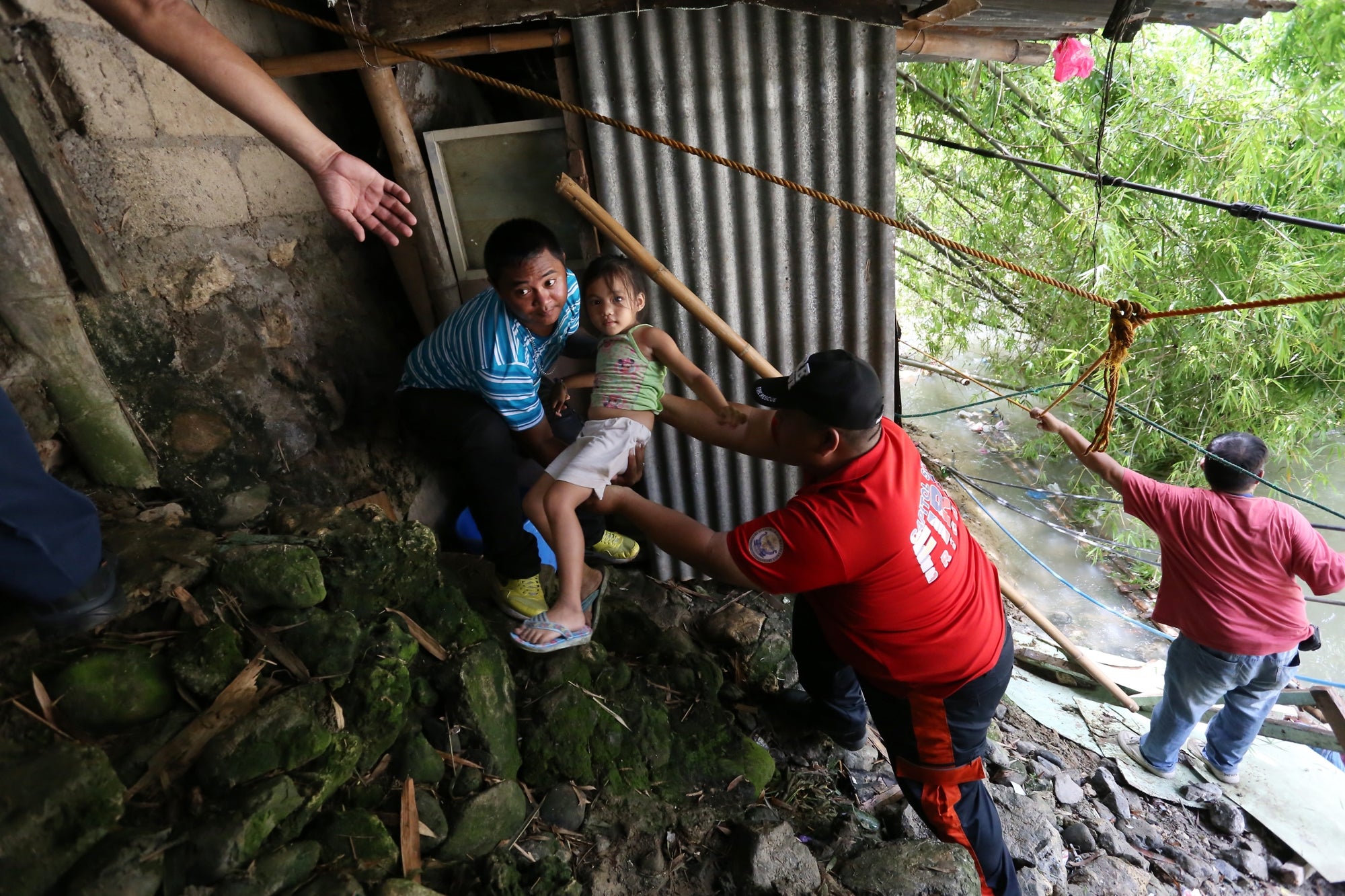 The rain that fell most of Thursday has already stopped when Jun Rey Oyao, 30, heard a loud and deep creaking sound outside their home in Sitio Lower Ponce, Barangay Capitol Site in Cebu City.

Upon opening the door, he was horrified to see a thicket of bamboo trees crushing two houses just across his own. The bamboo trees were uprooted in a landslide of soil loosened by the incessant rain experienced since early afternoon on Thursday.

(It was around 9 p.m. and the rain has stopped. I heard a loud creaking sound. When I got out, I saw the bamboo trees sliding down, going to the houses.)

One of the houses was a two-storey structure owned by Oyao’s parents. One of his siblings lived on the ground floor. The second floor, which bore the brunt of the landslide, had been rented for about eight years now by a family of five from Bohol province.

Oyao said they immediately broke the windows in his father’s house and rescued his sibling and his family. They then rushed to the second floor of the house to check on their boarders and were able to rescue Fecilito Sanipa, 34, and his three children aged 8, 5 and 2.

(When I saw the mother, I thought it was already difficult. She was not moving and her hand was already black and blue because she was pinned down at her waist. That’s when we decided to first rescue the two-year-old boy who was crying in her arms.)

The mother was identified as Juvelyn Sanipa, 31, who was later declared dead in the hospital where rescuers rushed her.

The landslide also killed Elpedio Geraga, 64, who lived in the adjacent house.

According to the Nagiel Bañacia, head of the Cebu City Disaster Risk Reduction and Management Office (CCDRRMO), they were also able to evacuate 11 children and six adults when they responded to the area on Thursday night. The incident happened at 8:45 p.m.

He said the heavy rains last Thursday afternoon loosened the soil and the roots of the bamboo trees planted in the area, a hilly section that leads to the riverbank of the Guadalupe River.

Bañacia, in his Facebook post, said it took rescuers four hours before they managed to pull the bodies which were buried underneath piles of earth, broken bamboo branches and slabs of collapsed walls and housing materials.

At least four families were evacuated to the nearby Capitol Site Barangay Hall on the same night.

Oyao, who has been living in Sitio Lower Ponce for 23 years, said it was the first time that a landslide occurred in his area although residents have been constantly warned by barangay and city officials that they live in a danger zone.

Even when there were heavy rains, they have had no landslides and the river would not overflow since the riverbank’s riprap was high, he added.

“Mao to kompyansa ra kaayo mis tanan kay sa kadugay namo diri, walay ingani nga nahitabo hantud sa karon nga nahitabo (That’s why we were complacent because for the longest time that we are here, nothing like this happened until now),” Oyao said.

Heavy rains in Cebu City and the rest of Metro Cebu, which started at 3 p.m. last Thursday, also triggered knee-deep floods especially in the downtown area.

The area in Sitio Lower Ponce is densely populated, a home to hundreds of informal settlers. It is located around a steep hillside, 25 meters from the barangay road. It has a 45-degree elevation.

Residents use footpaths on their elevated pathways. The homes that were hit were located near the edge of the river and below a vacant lot where many bamboo trees grow.

“It is a hazard, high-risk area that is prone to landslide, flooding and fire,” Bañacia said, adding that the area a few meters above the affected homes was also damaged by a huge fire that hit last year.

They were also tasked to identify measures to prevent similar incidents from happening in the future.

“Of course, we’ll give financial assistance. Maybe P20,000 for the damage in their houses. The whole bamboo grass fell on their house,” he said.

He added he would leave it up to CCDRRMO to determine if there would be a need to relocate the residents of Sitio Lower Ponce.

In the meantime, CCDRRMO personnel have begun clearing the affected area of the uprooted bamboo trees.

The mayor said nearby residents should also temporarily avoid the area since the soil remains unstable.

DWUP operations head Genevieve Alcoseba said the area is private-owned. “But the residents have organized themselves as the Kawayanan Homeowners Association. They have been trying to negotiate with the landowners. I don’t know the status of their negotiations, but we will check,” she said.

Alcoseba agreed with the need for residents to temporarily leave the sitio, given the danger still posed by loose soil that could in turn trigger landslides.

Last Thursday night’s landslide was a reminder for the city government to already finish its comprehensive land use plan (CLUP), said Bañacia.

“(For now), we only deal with the effects. We have to go back to the cause. We have to finalize the comprehensive land use plan,” he said.

He added that the CLUP is also needed for him to finalize the city’s disaster management plan.

Cebu City started its land use plan in the 1990s, but this has remained unfinished.

Bañacia said the plan remains pending with the city planning and development office especially because of the need to update data including the city’s existing zoning and drainage system. The plan was last updated in 2010, he said.

Guisadio was the one who started the city’s land use plan when he was still the city planning and development officer in the 1990s. /WITH A REPORT FROM USJ-R INTERN ROSALIE O. ABATAYO