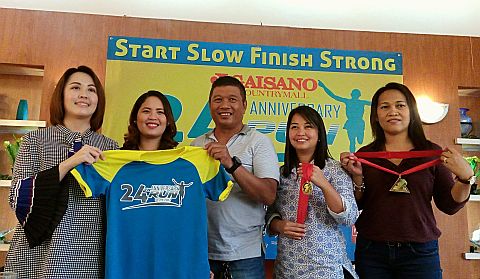 THE GAISANO Countrymall Anniversary Run continues its noble mission to help those in need.

The sixth edition held in line with the 24th anniversary celebration of Gaisano Countrymall will be held on Oct. 29. The starting area will again be at the spacious open parking area of the mall.

For two straight years, the Cure foundation, a nonprofit organization based in Cebu City that helps children who are sexually abused and oppressed, will be the beneficiary of the footrace.

Last year, the proceeds given to Cure Foundation were used to purchase furniture set and appliances intended for the “Rancho ni Kristo,” which is a shelter for young sexually abused girls who were rescued by the foundation.

“We would like to construct additional homes for the rescued young girls ahead so that we shelter more of them in the future. We are also building our own school,” said Jolene Van Oost in the official launching of the run yesterday at the Lighthouse Restaurant in Gaisano Countrymall.

Organizers are looking to surpass last year’s number of participants, which was 1,600.