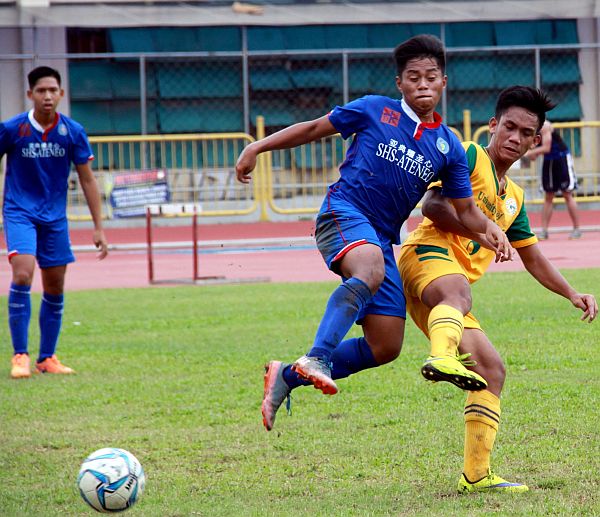 John Vincent Eduave of SHS-AdC and Ruschien Harl of USC-BED collide as they try to gain ball control during their secondary division football match of the Cesafi football tournament.
CDN PHOTO JUNJIE MENDOZA

The win capped off the Greywolves’ elimination round campaign with a perfect record of four wins and the biggest goal differential of +45 goals as the Bosconians bid for redemption after losing their title last year to the Sacred Heart School-Ateneo de Cebu (SHS-AdC).

E.R Orale and Christian Pacaña led the Greywolves’ searing assault by nailing two goals each while Jeremy Laro, Glen Thomas Ramos and Miguel Mercader each chipped in a goal.

“We vowed before the tournament started to score a lot of goals in the eliminations and I am glad that my players delivered,” said DBTC’s head coach Glenn Ramos. “I know that my players are hungry to win back the title and I told them to do their best. I am confident that we will triumph in the semifinals and the championship match because my players who saw action action in the Palarong Pambansa are still playing.”

The Greywolves will face the University of San Carlos-Basic Education (USC-BED) in their 10 a.m semifinal game today.

Meanwhile, the USC-BED managed to salvage a draw, 1-1, against SHS-AdC.

Joseph Ruedas of USC-BED and Kyle Go of SHS-AdC scored their respective team’s goal. SHS-AdC will face USP-F at 8 a.m in the other semifinal match.

The championship game in the secondary division is slated on October 8 at the CCSC.

Today’s afternoon collegiate matches pit USP-F against University of the Visayas at 1 p.m and the University of Cebu versus the defending champion USC at 3 p.m.