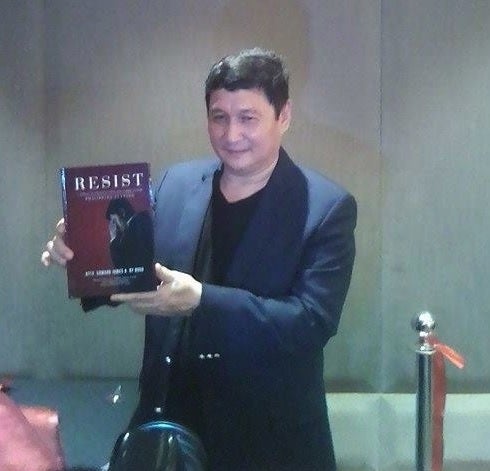 FOR Lawyer Edward James Dy Buco, corruption is a work of the devil that can only be eradicated using the Word of God.

With the prevalent scandals of corruption at the Bureau of Customs (BOC) where Dy Buco is a deputy commissioner, he said that the only antidote for corruption is for government officials to realign their lives to the Bible’s teaching; hence, he wrote a book titled “Resist: A Biblical Perspective on Corruption.”

The book is the country’s first printed material that tackled the issue on corruption based on the theological point of view and was launched at Bai Hotel last Saturday.

“We know that corruption is the work of Satan, but what we do not know is where to find cure. As my contribution, I collated the pertinent and relevant verses in the Bible that talks about corruption,” said Dy Buco.

“When Senator [Panfilo] Lacson said, ‘Hell is empty because all the devils are in Customs,’ I’d say that is true. But BOC is not the only agency inflicted with corrupt practices,” Dy Buco said during the book launching.

Dy Buco, who served as a board member in Antique, affirmed that corruption has become a stigma that is destroying the institutions in the government.

He resigned from government service in 2014, and resumed office as deputy commissioner for BOC Assessment and Operations Coordinating Group (AOCG) in 2016.

Dy Buco revealed that he will be resigning from office again, in the height of the controversy faced by his office.

Dy Buco said he aims to instill a change of heart among the people who will read the book, in order for them to resist the temptation of corruption in the practice of public service.

One of the firsts to read his book is his chief of staff, Chie Oquias.

According to Oquias, reading the book has made her and her husband decide to leave government work.

“I am not encouraging those who are in government service to resign, but when you read the book, I hope that your hearts will be touched the way it had done to us,” said Oquias, who introduced the author and the book context during the launching.

The book is now available at Central Books outlets nationwide.