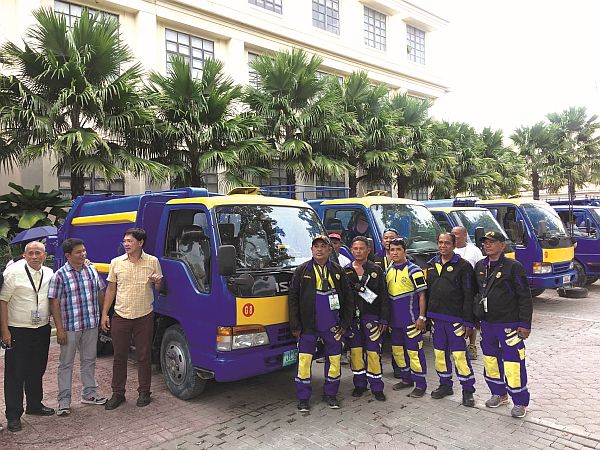 Two of Cebu City Hall’s top garbage-hauling service providers will now be working together to make sure that city streets are free of clutter.

The blue-colored Pamocor trucks were sent to the City Hall grounds on Thursday afternoon for turnover to the city government.

Cabarrubias said that the availability of leased trucks will allow DPS to ensure continuity of its garbage collection system.

“Our (garbage) collection before was on and off. Now, if one truck is not working, we have a (standby) replacement. So there is continuity in service,” he said.

Cabarrubias said the trucks will be assigned to collect garbage in “hot spot” areas and in major thoroughfares.

The availability of more trucks, he said, will also allow the city to collect more garbage which Pamocor trucks will bring from the barangays to the Inayawan landfill transfer station.

From the transfer station, garbage will then be loaded into Jomara trucks for transport to a private landfill facility in Consolacion town, north Cebu.

“The average (garbage collection) in our landfill is 620 tons (per day). Hopefully we will reach 700 to 800 tons because we will now be able to operate for 24 hours,” Cabarrubias said.

City Hall recently entered into contract with Pamocor for the lease of 11 garbage and 10 compactor trucks for a fee of P700 per hour from October 2 to December 31, 2017.

The city also inked a separate garbage-hauling deal with Jomara for a fee of P1,296. Said contract is valid from September 1 to December 31, 2017.
Jomara assumed the city’s hauling service needs after City Hall’s contract with Pamocor lapsed on August 31.

Read Next
Noble to vacate CPPO today; Okubo takes over