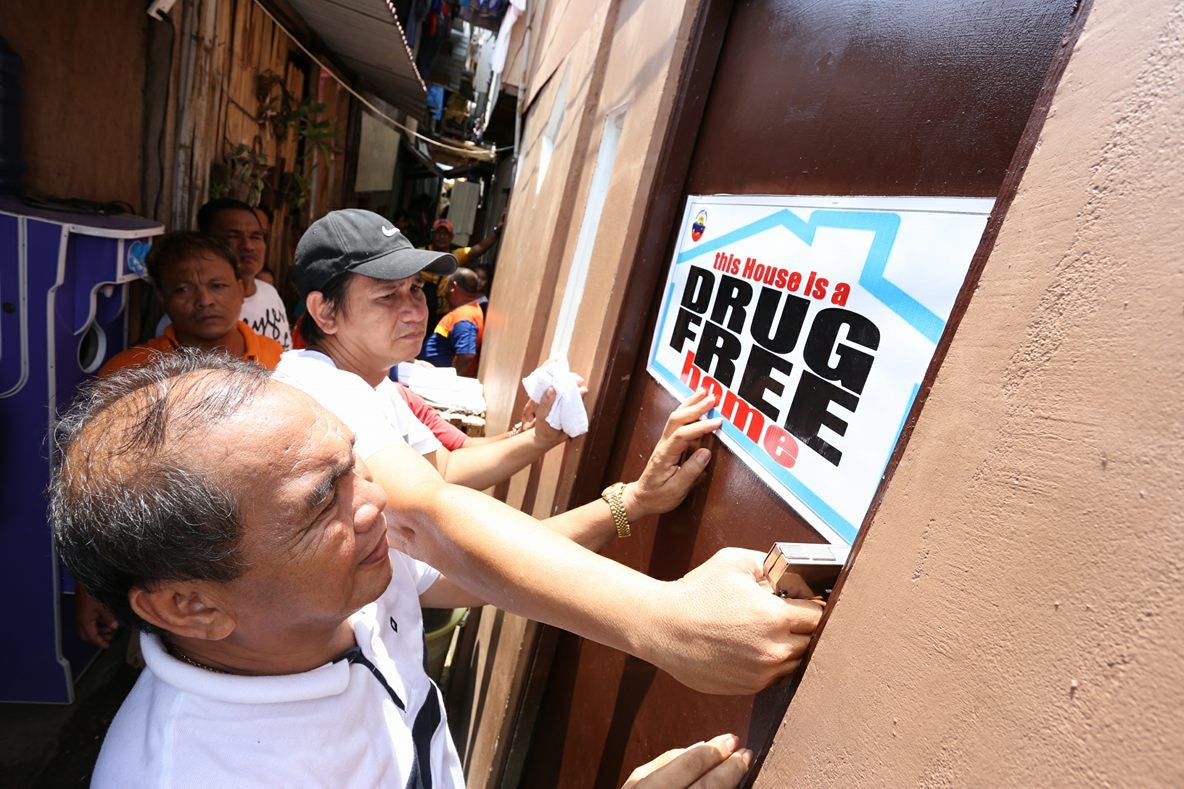 Barangay Ermita has gained a supporter in its campaign of labeling households which they have identified as “drug-free.”

The Association of Barangay Council (ABC) in Cebu City is pushing for a dialogue with the Commission on Human Rights in Central Visayas (CHR-7) to convince the latter to allow Barangay Ermita as well as other interested barangays to continue the campaign.

ABC President Phillip Zafra said they planned to reach out to CHR within this week, particularly since there are barangays in the city, including his own Barangay Tisa, that want to replicate what is being done by Barangay Captain Felicisimo “Imok” Rupinta in Barangay Ermita.

He asked if CHR-7 would react the same way if the people themselves decided to label their own homes as drug-free instead of the barangay officials doing it for them.

Zafra reiterated that the campaign is a way for the public to get more involved in the government’s campaign against illegal drugs by helping ensure that their neighborhood is free from drugs.

The call came after Rupinta continued putting tarpaulins that read “This house is a drug-free home” in his barangay over the weekend – a move which came less than 24 hours after he suspended the activity last Friday.

Last Saturday, Rupinta said bigger tarpaulins with the words “Beware: This is a drug den before” will be placed on suspected drug dens in his barangay.

The word “before” is included in the statement with the thought that drug den operators will eventually stop their illegal activities once the tarpaulins will be put up.

But while the barangay’s “positive approach” was supported by the ABC president, Zafra said he has reservations with this shame campaign to be rolled out by Barangay Ermita.

He suggested that the barangay should not do this yet, especially with their upcoming meeting with the CHR.

Zafra said that aside from himself, the ABC board will also be attending the meeting with CHR-7 officials once it is scheduled.

He also asked Rupinta and other barangay captains who are interested in replicating the campaign of labeling “drug-free” houses to join the meeting.

“Eventually, we want the discussion to be done comprehensively, with all the barangays captains interested. Hopefully, we can finalize the schedule.

We also want the police and the PDEA (Philippine Drug Enforcement Agency) to join us,” Zafra said.

The gesture was welcomed by CHR-7 Director Arvin Odron.

He said that if he had no official travels outside the region or other prior commitments with the security and law enforcement sectors recently, he would have already met with the concerned barangays who will be implementing the campaign.

“I welcome the plan of the ABC president. That is a good gesture on the part of a local official recognizing the expertise of the CHR on matters related to human rights. I am very open (to that),” Odron said in a text message to CDN.

He added that he hopes to have the meeting within this week or the soonest time possible.

Odron earlier called on officials of Barangay Ermita to stop their campaign of labeling “drug-free” houses, which started last Thursday, saying it could be considered by human rights groups as discriminatory.

Rupinta said he was determined to push through with his campaign, saying he has seen positive results from the activity.

For one, he said some identified drug pushers in their barangay talked to him and said they would be going back to their provinces following the barangay’s campaign.

He cited another example of a household which was not among the houses labeled as drug-free since the father in the family was identified as a drug user. The wife, he said, reprimanded her husband for dragging the entire family in the issue. The couple’s children are now professionals, according to Rupinta. He said the rest of the family members are now pressuring the father to stop using illegal drugs and cleansing himself. Rupinta said he advised the family to let the father undergo a drug test once he is already clean. By then, he said their house will also be labeled drug-free.

For now, around 1,600 houses in the barangay have been labeled. Another 500 houses are yet to be visited and labeled by barangay officials.

Rupinta said he agreed to hold off the putting of the bigger tarpaulins identifying drug dens until after having a discussion with the CHR-7. This is similar to the shame campaign in Barangay Pajo, Lapu-Lapu City, which was earlier called “unconstitutional” by CHR-7.

This was welcomed by Zafra who said a mechanism will be put in place in the city in order to do this properly.

Zafra said he has a pending ordinance that aims to establish a Cebu City Anti-Drug Administrative Board. This will be the agency where barangay officials or residents can send complaints on suspected drug den operations in their areas.

The board will be headed by the mayor. Its members include several City Hall departments, PDEA, the ABC and the police, among others.

The board will then hear the complaint and look into it based on evidences and testimonies. If found true, the board will declare this certain household as a “drug-related nuisance.”

The power to declare this will be given to the city mayor.

“That’s my advice. Don’t implement it (shame campaign) yet. Just wait for the ordinance,” Zafra said.

The ordinance already underwent a public hearing in the Cebu City Council and has gained the support of the Dangerous Drugs Board (DDB), PDEA and the barangays.

Zafra said he will soon be doing the same campaign of putting stickers in identified drug-free households in Barangay Tisa.

He clarified that the process has been tedious that’s why he has not started the campaign yet. Among others, the process undergoes verification and validation from the barangay anti-drug abuse council (Badac), interviews with homeowners associations and neighbors and comparison with data from the police and PDEA.

They have already started printing the 5,000 stickers needed for the campaign.

Aside from Tisa, Zafra said the barangay captain of Lorega San Miguel also approached him, saying that they are interested in doing the same in their barangay.

But there are also some that are yet to be convinced by this campaign including Barangay Duljo-Fatima.

“I don’t like to comment yet (on what Barangay Ermita is doing). I will have to think about it (doing it in my barangay),” said Duljo-Fatima Barangay Captain Elmer Abella.

He assured though that even without the campaign, the barangay is doing its best to eradicate the presence of illegal drugs in their area.

Abella said they would shoo out of their barangay those that have been identified as pushers amid an intensified anti-drug operations. In September alone, he said they have filed 28 drug-related cases against suspects they have caught.