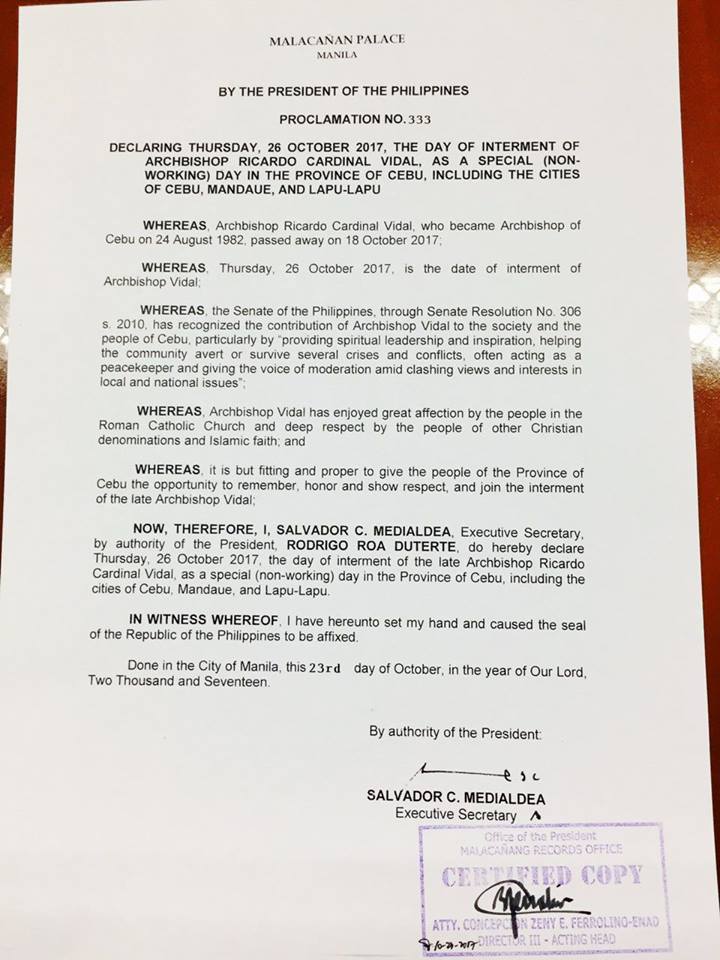 CEBU CITY—It is now official: October 26 has been declared a special non-working holiday in Cebu to allow more Cebuanos to attend the funeral of Cebu Archbishop Emeritus Ricardo Cardinal Vidal at the mausoleum of the Cebu Metropolitan Cathedral in downtown Cebu City.

Proclamation No. 333 was issued by Executive Secretary Salvador Medialdea on Monday afternoon, hours after President Duterte visited the wake of Vidal at the cathedral and announced that Oct. 26 would be a non-working holiday in Cebu including the cities of Cebu, Mandaue and Lapu-Lapu.

According to Proclamation No. 333 dated Oct. 23, it was only fitting and proper “to give the people of the province of Cebu the opportunity to remember, honor and show respect and join the internment of the late Archbishop Vidal,” who “enjoyed great affected by the people in the Roman Catholic Church and deep respect by the people of other Christina denominations and Islamic faith.”

It cited Senate Resolution No. 306 s 2010 which recognized Vidal’s contribution especially in “providing spiritual leadership and inspiration, helping the community avert or survive several crisis and conflicts often acting as a peacemaker and giving the voice of moderation amid clashing views and interests in local and national issues.”

A copy of the proclamation was posted on the Facebook account of Jonjie Gonzales, chief of staff of Presidential Assistant for Visayas Michael Dino, early Monday night.