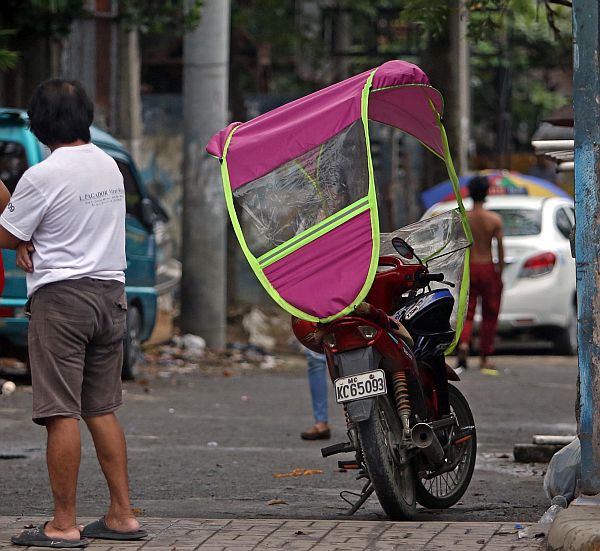 Citing “information” that reached him, which claimed that several accidents happened involving improvised motorcycle canopies such as this one shown in the photo, Cebu City Councilor Pastor Alcover Jr. has proposed an ordinance banning the use of the accessory which is fast becoming a trend.
CDN PHOTO/LITO TECSON

HAVE you ever tried riding a motorcycle and getting all wet when it started to rain, or sun-burned when the weather was intensely hot?

Because of this common problem, improvised plastic roofs that can be easily attached to a motorcycle to protect the driver and riders from direct exposure to the rain or sun have become a common sight in the streets of Cebu City.

But while many motorists view the canopied motorcycles with amusement, the growing trend has caught the attention of a city councilor who now wants to pass an ordinance banning the use of the accessory.

“We received information that there are already many accidents that happened,” said Alcover in proposing the ordinance.

“It is prone to accidents. Dali mapalid sa hangin (It can be easily blown off by the wind),” he added.

Alcover pointed out that the canopies, which are not an original and intended part of motorcycles, do not have the approval of motorcycle manufacturers.

His proposed ordinance was referred to the committee on laws for its review and recommendation during the Cebu City Council’s regular session last week.

Under the proposal, violators will be fined P500 on the first offense and P1,000 on the second offense. A fine of P2,000 and the confiscation of the canopy will be meted out to people violating the ordinance for the third time.

The Mayor’s Office through the Cebu City Transportation Office (CCTO) will be in charge of enforcing the ordinance if it is approved. The CCTO will also be tasked to draft the law’s Implementing Rules and Regulations (IRR).

Sought for comment on Alcover’s proposal, CCTO operations chief Francisco Ouano believed that the use of motorcycle canopies is okay for as long as these are sturdy.

“That can be used because in Japan, they have a similar assembly but it is not that weak,” said Ouano.

“ We understand that the reason for the canopy is to protect motorists from the heat and rain. As long as it is strong, it’s okay,” Ouano added in Cebuano.

Contrary to information reaching Alcover, the CCTO has not recorded any motorcycle accidents caused by the use of the canopies.

According to Ouano, while there had been accidents involving motorcycles with improvised plastic roofs, the incidents were mostly road collisions that had nothing to do with the canopies.