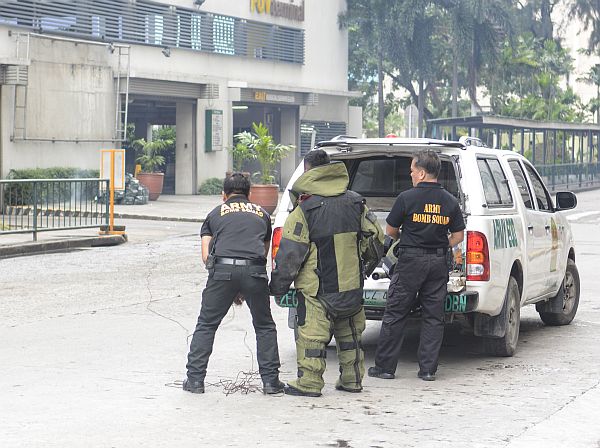 THE need to improve terrorism response was realized during the simulation exercise (simex) organized by the Armed Forces of the Philippines Central Command (AFP Centcom) at the lower terminal area of Ayala Center Cebu yesterday.

A lack in additional personnel in charge as well as a divided medical team were among the observations during the Improvised Explosive Device (IED) simex.

“Mag critique mi sa nahitabo ron and mag briefing mi sa security officer sa Ayala and all other involved units kay para mas ma improve pa nato ang atong mga response in these kinds of incidents (We will critique what happened today and we’ll be briefing the security officer of Ayala as well as all the other involved units so we can further improve our response in these kinds of incidents),” said Police Chief Insp. Clark Arriola, Chief of Mabolo Police Station.

Despite some minor lapses, Arriola commended the participants for effective police response time.

However, retired Col. Ed Layese, security manager of Cebu Holdings, Inc. said this was not the case in their regular drills and practices among the security personnel within the mall.

“Diri sa mall, every time naay incident, amo buhaton among procedure. Inig abot na sa PNP, I turn over na namo sa ila (Every time there is an incident in the mall, we go for our standard procedure. Once the PNP arrives, we turn the task over to them),” Layese added.

The exercises that happened within the PUV terminal area consisted of two bomb explosions, with the second garnering eight casualties.

According to Senior Supt. Joel Doria, Cebu City Police Office (CCPO) director, the drills conducted by the different police stations were in compliance with the directive from the Police Regional Office in Central Visayas (PRO-7).

Doria also added that the past exercises were successfully implemented by the police stations, and that these were done for them to know how prepared they would be in responding to incidents.

The scenario involved a monitored plan by a Violent Extremist Organization (VEO) to attack Cebu. The group staged a bomb explosion at the PUV terminal with a hijacked aircraft from Zamboanga City that was diverted to Cebu. Authorities were able to capture the Improvised Explosive Device (IED) bomber who disclosed information on the organization’s other bombing plans.

Further looked into in future exercises are the heavy traffic and the mall’s customers.

“Kani lang siya na-timing nga wala pa nag open ang mall then sayo pa sa buntag so wala pa’y traffic. Next time, we can schedule nga heavy traffic napud kay para atoa gyung makit-an unsa gyud kaabtik ang response sa different units in these kinds of incidents (Since today’s exercise was conducted early in the morning, there was no traffic yet. Next time, we can have it scheduled during heavy traffic to see how fast the different units are in responding to these kinds of incidents),” Arriola said.

Layese said he was confident that his men would be able to execute their tasks properly since they would regularly conduct drills.

He added that the real challenge would lie on the customers’ reactions.

An advice by police to the public in such situations is not to panic as this may cause stampede. Instead, call the attention of the nearest security officer since they have a standard procedure of handling emergency situation.