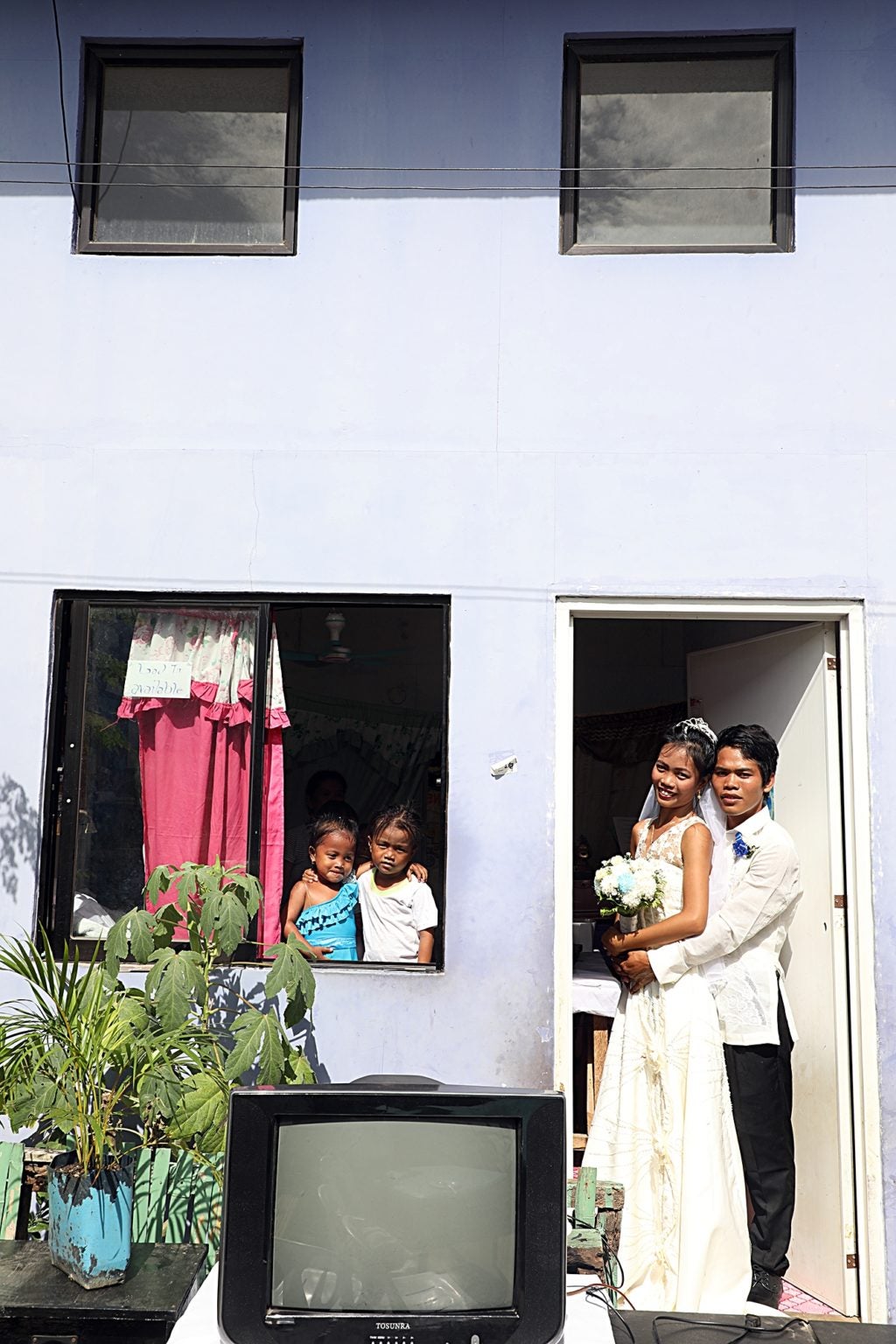 SM CARES VILLAGE BOGO/NOV 25,2017: The family portrait of the newly wed couple pose at their house after the mass wedding ceremony, one of the highlights at SM Cares Village Bogo 3rd anniversary. (CDN PHOTO/TONEE DESPOJO)

Bogo City — Juric Omaque and Khimberly Mahilom’s star-crossed love story began with text messages and a chance meeting at a restaurant in Mandaue City on Dec. 22, 2010.

Omaque, a construction worker of Barangay Lamac, Pinamungajan town and Mahilom, a resident of Bungtod, Bogo City, who worked as a waitress at the restaurant, were teenagers when they hooked up.

They broke up after four months due to petty misunderstandings but on Sept. 7, 2011, Omaque texted Mahilom to reconnect with her and on New Year 2012, he went to Bogo City to meet her.

“I felt she is the woman for me because we can talk about anything. We make it a point to provide for our two children even when times are hard,” Omaque said.

The couple settled in Barangay Bungtod where Mahilom’s parents lived. 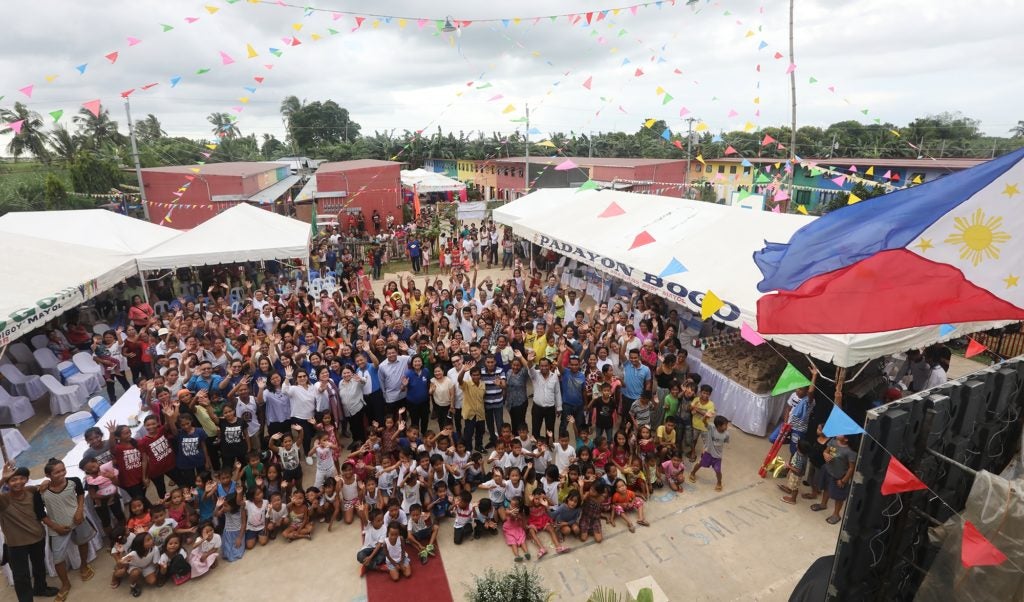 After five months, she got pregnant with their first born, Khian Ghourge. Two years later, a daughter, Khyla Clear was born.

Super Typhoon Yolanda devastated Bogo City on November 8, 2013 and among the survivors were the Omaque couple.

“Our home was destroyed. After a year of living in evacuation center and with relatives, we moved to the SM Cares Village in Barangay Polambato after being screened as one of the beneficiaries,” Mahilom said in Cebuano.

Yesterday (November 25), the Omaque couple together with nearly 200 families celebrated the third anniversary of the SM Cares Village-Bogo, the first 200 of the 1,000 disaster-resilient houses built for those who survived Yolanda (international code name Haiyan). 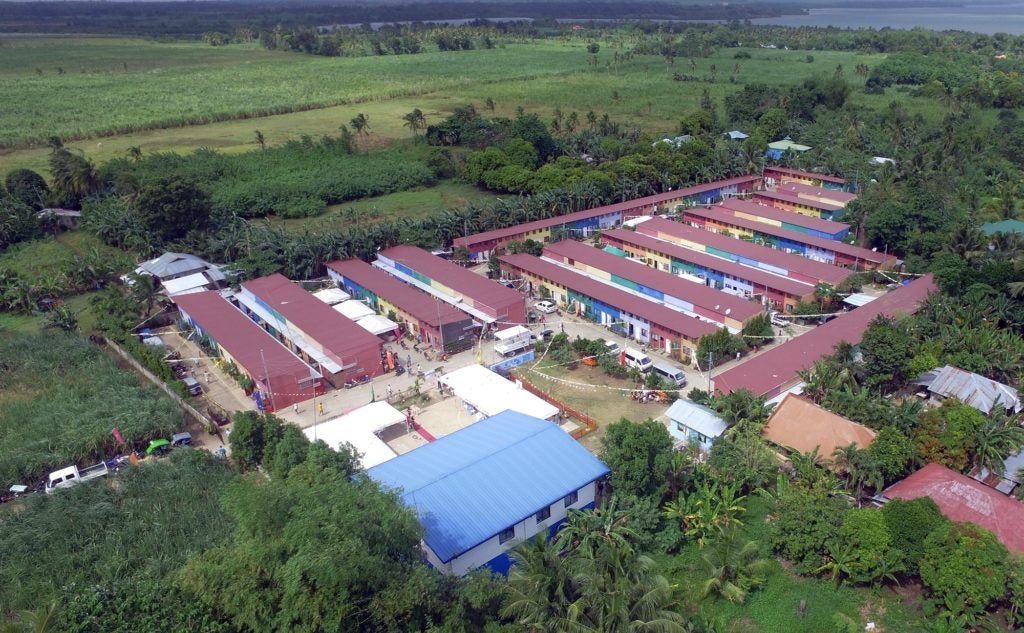 As part of the third anniversary celebration, the Felicidad T. Sy Foundation Inc. sponsored a mass wedding for 19 couples, including the Omaque couple.

SM Cares Village-Bogo sits on a one-hectare property which used to be a sugarcane plantation.

It was donated by the heirs of Wenceslao and Margarita Briones-Fernan.

“I am sure that my grandparents and parents are happy watching what you did to this community. I am so happy looking at you and your smiling faces,” Fernan told more than 800 village residents in Visayan. 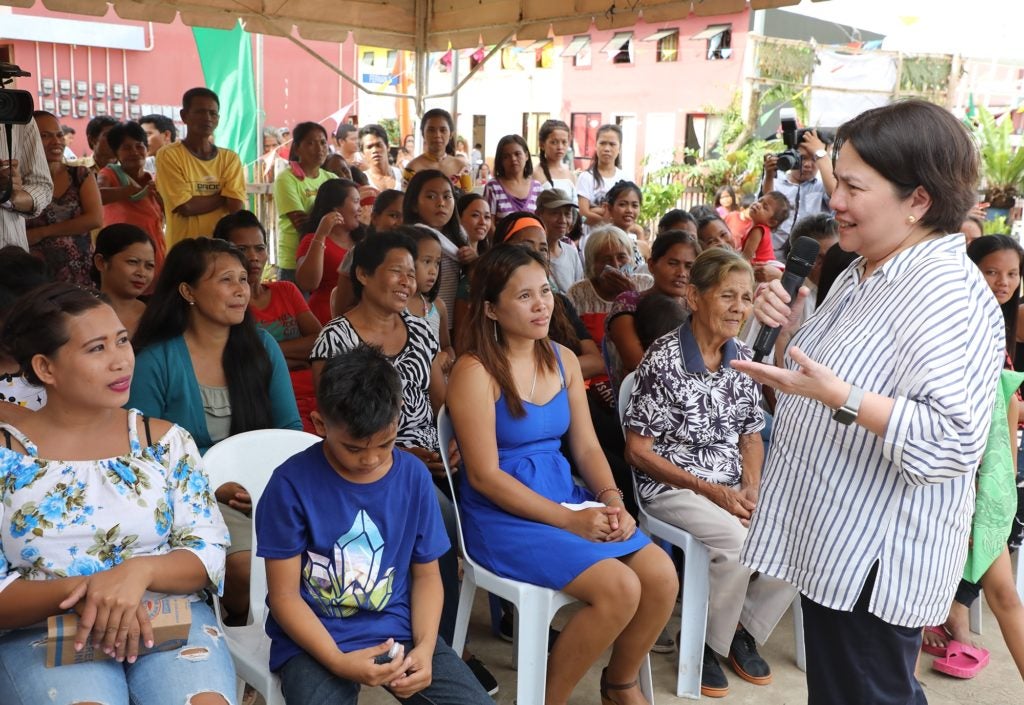 SM Cares is a division of SM Foundation. RAFI is one of SM’s partners in growing the community.

A community organizer, Joey Bautista, was embedded in the community in the last three years.

RAFI handled desk and field validation and approval of the housing project beneficiaries.

“The story started on a sad note in 2013 but today, it sends a very hopeful message,” said lawyer James Abadia, RAFI vice president for social development.

Each SM Cares Village entails an investment of P70-P75 million. Partners come from the private sector.

In Bogo, the community center was donated by Joint Manning Group while the basketball court was donated by BPO (business process outsourcing) company Arvato.

SM Supermalls president Annie Garcia said SM Cares Village-Bogo signified their commitment to give back and a testament that no challenge is too big if “we face it together.”

“When we started, all we had were plans and concepts. Today, we see a community filled with positive dreams and empowered by hope and passion.

The families continue to be symbols of hope, shared partnership and modern day bayanihan,” she said.

Garcia said the project went beyond the drawing board and resulted to active, resilient and happy families.

“These are not just structures but collaborative venues… Not just concrete slabs but venues to build friendship and espouse teamwork,” she said. The families started living in the village last November 9, 2014.

To mark the third anniversary, beneficiaries were awarded certificates that gave them the right to live in the land for 25 years.

Neralyn Montejo, vice chairperson of SM Cares Village-Bogo Homeowners Association, said the aftermath of Super Typhoon Yolanda was a test of faith for many of them.

“But it also proved that kindness and generosity are abundant among people and companies who are committed to lend a hand to those in dire need of help,” she said in Cebuano.

By: Wenilyn B. Sabalo
Community

Graduating from childhood cancer: Stories of courage, hope and success