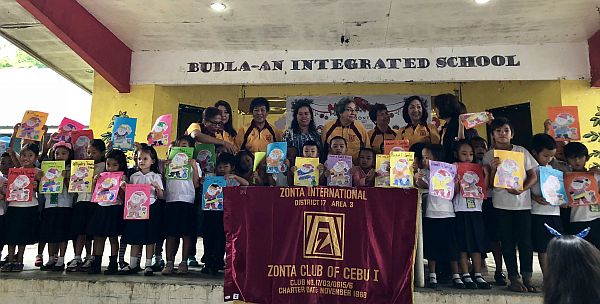 There was no Santa Claus in a sleigh pulled by a herd of reindeer to give away presents to children of Barangay Budlaan, a mountain village located 12 kilometers from Cebu City.

On the morning of December 14, a Thursday, the road from Barangay Talamban leading to Budlaan was wet and slippery due to incessant rain the previous night.

With only 11 days left before Christmas, it was what most people would describe as a gloomy and sad morning.

Yet nine women of the Zonta Club of Cebu 1, wearing their yellow and maroon shirts, woke up as early as 5:00 a.m. and trooped to Budlaan to spread Christmas cheer to the children and parents of the village which the club has adopted for 15 years.

Inside their cars were backpacks of school supplies, a box of books, candies, packed meals of spaghetti and chicken, and giveaways for parents filled with canned goods and noodles.

That day, it felt like Santa Claus was around.

Zonta 1 vice president Ellen Luna said visiting communities to spread the joy and gift of Christmas has always been part of the story of the organization.

“We thank you for giving us the opportunity to serve you and for welcoming us in your community,” she told an audience composed of parents, barangay officials, teachers and children.

Fifty kindergarten pupils and 10 Grade 5 and Grade 6 students of Budlaan Integrated School were treated to food and given bags and school supplies shared by Anita Cabinian, Anita Sanchez and Hiroshima Philippines Friendship Society through Tomoe Yokohagi.

The event also included a storytelling activity and an arts session, which provided a sneak preview of the literacy project that Zonta 1 has been firming up with the barangay and the school.

The project includes training Grades 5, 6 and 7 students to hold weekly storytelling and arts sessions for the lower years, mainly kindergarten and day care pupils; while their parents will be given after-school tasks.

Ten students initially volunteered to take on the challenge of becoming what is called as junior storytellers.

Grade 6 pupil Adrian Arellano said he wanted to be a storyteller so he can share his talents to younger children.

Arellano, the fourth among five siblings, is a consistent honor student. His father, Edgar, is a mango farmer while his mother, Maria Flordizel, is a flower vendor.

“Books are magical places. They can take you to places you have never been before because of words and pictures,” he said.

Arellano, 11, added that it is important for children to love reading because it will help them succeed in their endeavors.

“We should not just be good at using gadgets. We should be good at reading books too. Gadgets can distract us from our studies. Books will level up our knowledge,” shared Arellano.

Teacher Elenita Bravo said creating a culture of reading needs to start at a young age because this will build the foundation for the child’s comprehension ability in the later years.

“It is sad to note that there are children who are 10, 11 or 12 years old but still cannot read because of several factors including no support from parents,” she said.

Bravo has served as an elementary school teacher for 15 years and a day care worker for seven years.

“This project tells us that everyone is responsible for a child to learn how to read and think. It will hopefully encourage the parents to play a big role in encouraging their children to read and not just rely on the teacher to do the job,” said Bravo.

Evelyn Archival, 52, accompanied her five-year-old granddaughter Ariana Faith to the event but left with valuable lessons to apply at home.

“I saw how the children responded when the stories were read. I was reminded of my young student days when we read “Pepe and Pilar” and how that experience widened my imagination and made me learn lessons in a relaxed manner,” she said.

Archival also expressed gratitude to Zonta 1 for sharing their blessings to them.

Chartered on November 8, 1968, Zonta Club of Cebu 1 is an organization of accomplished and distinguished women who excel in their respective professions. They are composed of entrepreneurs, lawyers, educators and accountants, among others.

In their 50-year history, the club has implemented projects in education, women empowerment including saying “no” to violence against women, livelihood and health/nutrition.

Budlaan Barangay Captain Nerissa Antolihao said Zonta 1 was responsible for bringing livelihood opportunities which include sewing and orchid growing for the women in the village.

“They are well-to-do individuals, but it is easy to approach them. They are generous and showed to me by example that I can be an empowered woman,” said Antolihao, who was a barangay councilor when Zonta 1 adopted Budlaan in 2002 through a micro-financing loan program.

Read Next
Rains fail to dampen warmth of faithful