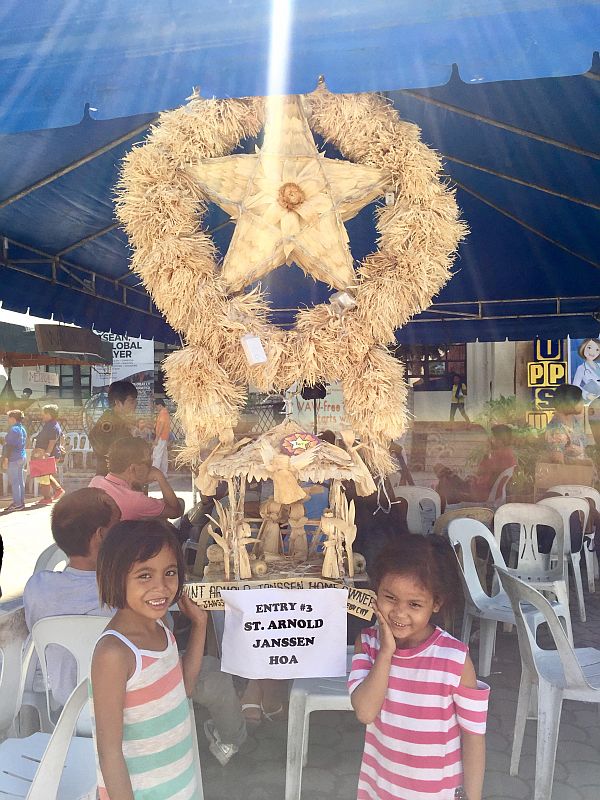 st. Arnold Janssen HOA’s giant lantern won the parol-making contest organized by Cebu City’s Division for the Welfare of the Urban Poor. The lantern is made of corn husks.
CDN PHOTO/Doris Mae Mondragon

A lantern, or “parol” in Filipino, has become more than a Christmas decoration in Filipino homes. For Filipino Catholics, parol — in all its forms and designs — symbolizes the joyful holidays.

For the 55-year-old Perla dela Torre, making her own parols is her way to not just showcase her creativity, but to thank Jesus Christ for all the blessings her family receives every day.
This year, dela Torre designed a giant star with a small “belen” underneath.

The parol, which was made of corn husks, took dela Torre and her group two months to complete.

But their efforts paid off when their parol was declared as the most eco-friendly and artistically designed lantern at the Cebu City Hall- Division for the Welfare of the Urban Poor’s (DWUP) parol-making contest last week.

The contest, initiated by the DWUP, was open to all the homeowners associations (HOAs) in Cebu City.

“Ang design is pareha gyud sa natawhan sa batang Hesus and mao man pud ang essence sa Pasko, nga magpasalamat ta sa Santo Niño sa mga grasya sa tibuok tuig (The design is patterned from where the child Jesus was born. I think that the essence of Christmas is to give thanks to Santo Niño for all the blessings he gave us the whole year),” dela Torre said, adding that she has been making Christmas lanterns for more than 25 years now.

The materials for the lantern didn’t cost dela Torre’s team that much, since the corn plants were harvested and peeled fresh from their farm in Badian town.

Aside from the St. Arnold Janssen HOA, 23 other associations joined the competition.

The egg lantern from the HOA of Barangay Labangon emerged as the second prize winner.

The lantern was made of at least 30 pieces of egg trays and took the members of the HOA one month to finish.

Anita Abella, president of the HOA in Labangon, said they were thinking of other recyclable materials to use but since the plastic bottles have already been used by other teams, the group decided to make use of the egg trays in their households.

“Maayo kaayo ni nga contest kay maka-value ta sa mga butang nga abi nimo’g wa nay gamit, may kapuslanan pa diay. So ato gyud hiposon, kay moabot ra ang panahon nga ato ra pud diay ning gamiton (This is really a good contest because it teaches us how to value the things we thought were already useless. So, let’s learn to keep some of our used things because time will come that we will make use of them),” Abella said.

Abella, also an enviromental advocate herself, said all these ways of recycling and joining the parol-making contest also allowed them to actively participate in community activities.

The winner of the parol-making contest brought home P5,000 cash, while the second placer received P3,000. The other HOAs received a consolation prize of P1,000.

Genevieve Alcoseba, head of the DWUP, said the parol-making contest is just one of the many programs that the city government has prepared for the urban poor associations and families.

“In celebration also of the Urban Poor Solidarity Week, we are engaging in this activity to bring unity among the members of the HOA and for them to find solidarity inside their own associations,” said Alcoseba.

She added that the contest is also aimed to help minimize the pollution brought by plastics and other household wastes.

“We also want them to realize that all these trash that we throw everyday, naa gihapoy gamit (can still be used). These can be recycled in any way,” she said.

“Also, this allows them to cooperate and give active participation to their organizations because each entry will represent their respective organizations,” she added.

The Christmas lanterns were displayed in the tents outside the Cebu City Hall from December 2 to December 15, and were then transferred to their respective HOA offices.

Aside from showing off their capabilities in making parols out of recyclable materials and proving their teamwork and unity, the members of the different HOAs in the city also noted that their parols signify their hopes to finally get the official titles of their lots soon.

Read Next
Tomas, family to spend holidays in the US