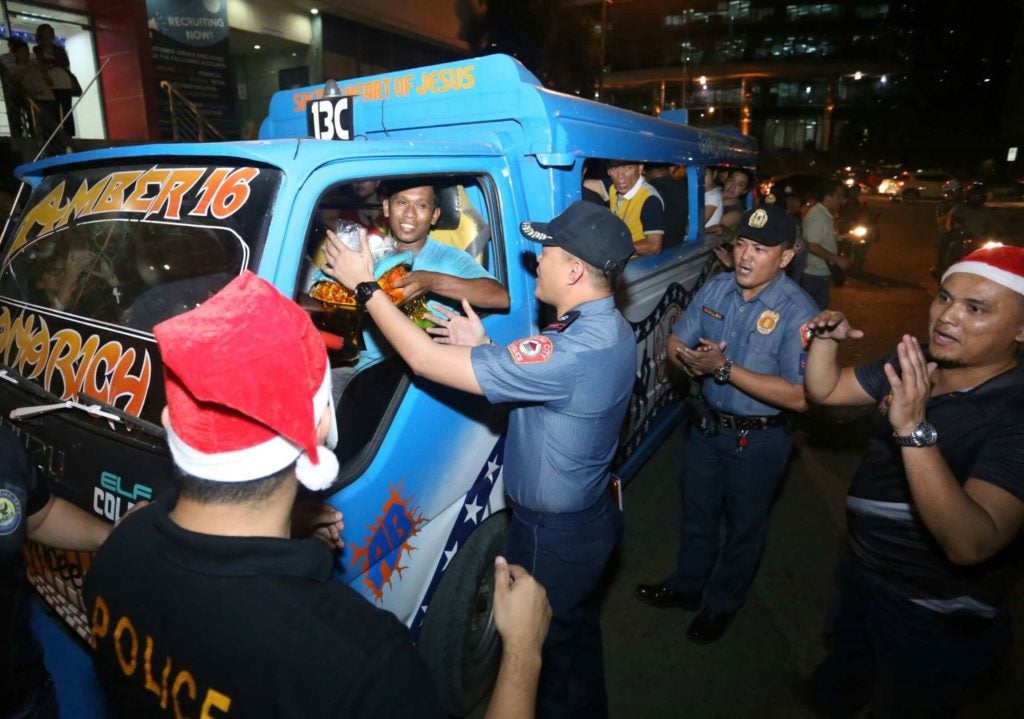 CAROLING time. The Mabolo police’s surprise caroling and gift giving event on Tuesday, Dec. 19, 2017, delight this jeepney driver, one of the about 50 who received gift packs from the station’s police force led by Chief Insp. Clark Arriola.
CDN PHOTO/LITO TECSON

PERSONNEL of the Mabolo Police Station flagged down public utility jeepney (PUJ) drivers in separate checkpoints along three major roads located within their area of jurisdiction, late on Tuesday afternoon.

But instead of issuing citation tickets, the group sang Christmas carols and gave out Noche Buena items to startled drivers.

“This gift-giving is a joint initiative of the Mabolo police and its police advisory council,” said Chief Insp. Clark Arriola, head of the Mabolo Police Station.

Arriola said businesses within their jurisdiction also helped them purchase their Noche Buena packages, which they placed inside plastic pails.

“We are taking a break from the usual things that we do because Christmas is the time of the year to share our blessings to others,” he added.

Porferio Pajarillo, 51, said he became very worried after policemen flagged down his unit bound for Barangay Lahug in Cebu City.

Pajarillo, of Barangay Guadalupe, said he thought he would be issued a citation ticket for a traffic violation.

“Nakuyawan kaayo ko kay mao pa ra bay pag gawas nako (I became very worried that I will be issued a citation ticket since it was my first trip for the day),” he told Cebu Daily News.

A policeman approached him to ask for his license.

But instead of bringing out a citation ticket, the policeman handed him Noche Buena items, which included eggs, pasta and canned goods.

The policeman also explained to him the purpose of their activity before he was joined by others in singing Christmas carols to Pajarillo and his passengers.

Ten uniformed policemen led by Arriola and 10 civilian members of the police station’s advisory council joined the two-hour “checkpoint,” which started at 5 p.m.