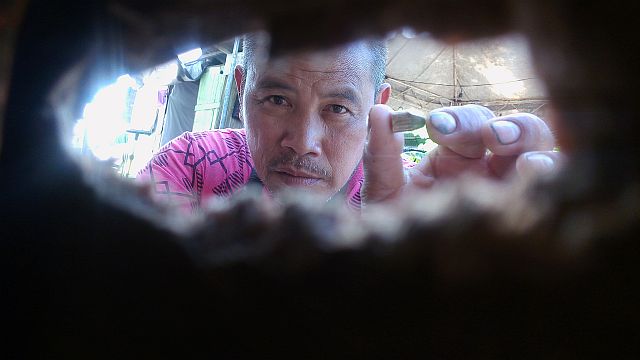 Village watchman Wilson Batucan shows the slug of a 45 caliber pistol from a hole in his house pierced by a stray bullet that killed his 7-year-old son, Saniño last December 2016. The boy was killed by two men riding in tandem on board a motorcycle, during an allegedly failed police anti-drug operation in Sitio Nangka, Cansaga, Consolacion. The older Batucan was later killed three months after the controversial death of his son, by an unknown assailant, purportedly to silence the boy’s
grieving father.
CDN FILE PHOTO

For 19 years, Henry (not his real name) has found himself in the frontline during drug raids.

The task has not been easy.

“Og motrabaho ka, daghan ka og kaso nga atubangon. Kami pay magbayad og abogado aron modepensa namo. (If we do our work, we face a series of cases, and we have to pay for lawyers to defend us).”

Henry, who is currently assigned in one of the top police units in Cebu, expressed hopes that the police will be given a bigger budget for their anti-drug operations to finally put an end to the drug menace that has plagued the country for decades.

“Mas nindot kon duna gyuy igong budget para surveillance, test buy, ug bisan sa pagpalit og pagkaon og gasolina kon duna mi lakaw. (It would be better if we have enough budget for surveillance and test buy, as well as to buy food and gasoline whenever we go out during operations),” he said alluding to what the police force believes is a strong need to have more operational funds to go after drug personalities.

“Gusto ta mokuha og usa ka banyera nga isda, unya pasol ra ang atong gamiton. (We want to catch a bucket of fish and yet we are only using a fish hook),” he added thoughtfully.

But it remains to be seen whether or not the PNP will get the full budget that officials believed it needed to combat illegal drugs in 2018.

A P900 million fund allocation originally intended for PNP’s anti-drug operations in 2018, was realigned by the Senate last Nov. 29 for housing ofmilitary troops and police officers.

At that time, the Senate explained that the budget had to be allocated for another purpose, since the police then, were prohibited from conducting anti-drug operations amid strong criticism over the spate of killings in the country.

On Dec. 5, the President gave his go signal for the police to rejoin the war on drugs. However, there has yet been no word from the Senate whether or not the PNP will be given back the P900 million budget allocated for their illegal drugs campaign.

But whether or not it will come, he vowed that the PNP will do its best to maximize whatever resources it has, to end the country’s drug problem.

“For now, we could not say what would be the effect (if the P900 million budget won’t be allocated for the PNP’s anti-drug operations). Fighting illegal drugs is still part of our regular operating expenses, and the President has just recently brought back the role of the PNP in the war on drugs,” Espino told Cebu Daily News.

“I hope our lawmakers will realize the importance of that budget and will eventually bring back the amount which was realigned,” he added.

Espino believed that PRO-7 has been successful in reducing the supply of illegal drugs in the region as manifested by the prices of shabu (methamphetamine).

“We were really able to bring to the minimum level the supply of drugs in Central Visayas, and that resulted to the skyrocketed prices of shabu. At the same time, because of about 100,000 drug surrenderers who undergo community-based rehabilitation programs, we will also be able to address the demand next year,” he said.

Based on the monitoring of the Philippine Drug Enforcement Agency in Central Visayas (PDEA-7), a gram of shabu has soared from P1,500 in previous years to P8,000 in the region due to government clampdown on illegal drugs.

“Most of the high-value targets from the municipal level up to the regional level were already arrested while some were neutralized. It has been a very successful campaign on the part of PRO-7,” Espino said.

Based on PRO-7 records, at least 188 drug suspects in the region were killed in alleged shootouts with policemen, while 213 others were gunned down by still unknown assailants since July 1, 2016.

On the other hand, at least 9,466 drug suspects were arrested in the region over the same period, while some 108,742 drug users and pushers surrendered to authorities at the onset of Oplan Tokhang (toktok hangyo), a police door-to-door anti-drug campaign where suspects are asked to surrender and sign documents renouncing their involvement in illegal drugs, either as a user or a peddler.