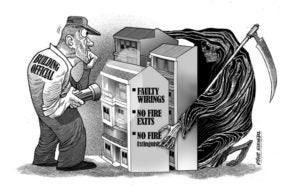 Like all bad news, the story of the fire that struck the Gaisano-administered Metro store at Cebu City’s Ayala Center was not totally grim.

In the first place, as the store management told the public, workers and customers to safely evacuate so that no one perished or was hurt in the inferno that lasted from Friday to Sunday.

Secondly, the response of government agencies like the fire bureau and departments as well as disaster offices attached to Cebu’s local governments was timely and adequate.

Special thanks should go to the firefighters who battled the blaze and the thick haze for three days (bar the duo who stole shoes while at it), until its containment and extinguishing yesterday.

Those who donated food and water to sustain the firefighters should likewise be commended.

We are still mourning with our compatriots who lost loved ones to the fire at NCCC Mall in Davao City late last year.

The fruitful prevention of loss of life at the Cebu mall fire therefore brings us a measure of relief.

Nevertheless, even as local fire investigators probe the Ayala incident, the nationwide audit of fire safety in malls that the Trade Union Congress of the

Philippines called for should be heeded.

The inter-agency audit needs to be conducted for all buildings frequented by large publics. No one looks forward to belatedly discovering that a building’s sprinkler system as in NCCC Mall is a dud.

Whatever the case, the haze on the heels of the Ayala fire that diminished air quality and endangered public health sufficiently, underlined how crucial is the maintenance of functional firefighting paraphernalia in buildings.

A stringent fire safety audit is especially needed in Cebu where buildings are sprouting like mushrooms after the rain.

Better safe than to realize too late that our construction boom is an exercise in planting incineration towers.

Read Next
Sydney swelters through hottest day since 1939