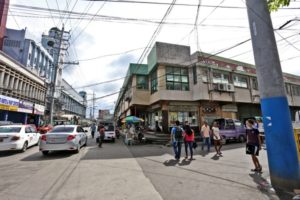 The area at Leon Kilat corner in Barangay Ermita where the female college student was supposedly kidnapped. (CDN PHOTO/JUNJIE MENDOZA)

A FEMALE college student who was reportedly abducted in Cebu City early on Monday morning was found in Barangay Jubay in Liloan town in northern Cebu, at least 15 hours after she went missing.

Jubay Barangay Councilor Avil Goc-ong said the woman claimed to have escaped from her abductors and sought help from one of the residents in their barangay around 8 p.m.

Goc-ong said the woman’s hands were tied with a cell phone charger while she appeared to have bruises on her body when found.

Jubay barangay officials already turned over the student to the Liloan Police Station for custody.

He said the student told her family that she waited for a passenger jeepney along Natalio Bacalso Avenue when three foreigners arrived in a black van bearing plate number PMQ 128 and forced her inside where two Filipinos were also on board.

Doria said the family told them that the men somehow got wind of the victim’s efforts to communicate with her family and posted a private message on her Facebook account at 10 a.m. that read: “STOP FINDING THIS WOMAN OR ELSE I’LL KILL HER IF U KEEP ON CHAT AND CALLING I WILL KILL HER.”

Doria said they will verify if the Facebook private message is authentic or not.