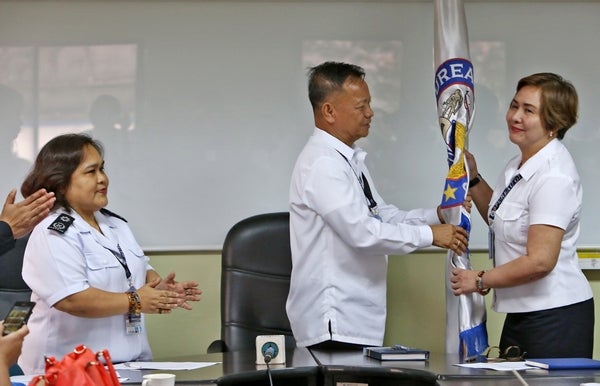 Three months ago, she was relieved as district collector of the Bureau of Customs (BOC) in Cebu as part of the efforts to clean up the bureaucracy.
But on Monday, Elvira Cruz was back to her post on orders of Customs Commissioner Isidro Lapeña.

“Yes, she was relieved from her post. However, upon evaluation, she was actually doing good here in Cebu,” said Lapeña in an interview after he led the formal installation of Cruz at the BOC Cebu office on Monday afternoon.

In August last year, Cruz, along with former Customs Commissioner Nicanor Faeldon and other Customs officials, were accused by Senator Panfilo Lacson of receiving payoffs for every shipment smuggled through major ports — an allegation which she vehemently denied.

After over a month, Cruz and seven district collectors as well as 30 section chiefs were relieved from their posts by Lapeña as a way of cleansing the ranks of BOC.

But Lapeña clarified on Monday that Cruz was not relieved because of corruption but due to her failure to meet BOC Cebu’s target collection in September 2017.

He challenged Cruz to do a better job to meet the target collection.

“We expect a better performance under your mandate. I know you can deliver,” Lapeña told Cruz.

The manner district collectors achieve their target collections, he stressed, will be the primary basis in evaluating their performances as well as “future actions” as to whether they will be replaced or not.

The BOC has a nationwide target of P598 billion for 2018. Of the amount, Cebu District Office is tasked to put in P13.9 billion in revenues.

Cruz, in response to Lapeña’s message, vowed to do her best to hit BOC Cebu’s target collection as well as to eradicate corruption in the bureau.

“I’d like to thank our Commissioner for the opportunity. I promise to serve better and faithfully the office. I will not fail you,” she said.

In an interview later, Cruz lashed out at Senator Lacson for dragging her into the controversial “tara” or bribe system at the BOC.

“Puro lang naman siya salita pero walang ebidensya. (Senator Lacson is just all talk but he has no evidence to prove it),” she said.

She said she was never investigated by any agency regarding the matter.

Cruz, a native of Manila, was first assigned in Cebu in 2008 as deputy collector for operations. In January 2017, she was named district collector.

She was relieved from her post in October 2017. Amid everything she went through, Cruz said she was grateful to Lapeña for giving her the chance to prove her worth.

“Of course, I’m happy because the commissioner trusted me. Otherwise, if he did not trust me, he should not have allowed me to come back,” she said.

Wivina Pumatong, who served as acting district collector of the BOC Cebu when Cruz was relieved from her post, slid down to deputy collector for administration.

Upon his visit in Cebu yesterday, Lapeña inspected at least 14 container vans that were “alerted” by the Customs.

He also conducted random inspection of 50 other container vans at the Port of Cebu.

“By doing this, I hope those who want to smuggle goods will now have second thoughts of doing it,” said Lapeña who served as director general of the

Philippine Drug Enforcement Agency before he was named Customs Commissioner by President Rodrigo Duterte in August 2017.

One contained packs of brake linings which did not have any Philippine Standard certification mark.

Franz Muñoz, one of the inspectors, said there was a possibility that the brake linings from China violated the intellectual property rights of another company under Republic Act 8293 or Intellectual Property Code of the Philippines.

Another container van, which was declared to have contained “used truck parts” from Japan had a whole truck inside.

Customs officials also discovered several plywoods from China which, instead of declaring a 4-percent tariff, did not declare any.

A van containing auto parts would also be checked for possible violation of the Intellectual Property Code.

The other vans that were alerted by the BOC contained various items such as laboratory furniture, steel poles and cement blocks.

These items, Lapeña said, would undergo valuation and assessment by the BOC officials.

If there were sufficient evidence, Lapeña said they would file charges against the shippers.

“For those who violate the intellectual property rights, we might as well inspect their offices or storage houses to find out if they are keeping more illegal items there,” he said.

Lapeña said he will also visit other Customs offices in the country to make sure officials and employees of the bureau are doing their jobs well. “We are strict of people who violate the rules,” he said, stressing the need to get rid of corruption in the bureau as mandated by President Duterte.

Read Next
Engineer shot dead by motorcycle-riding gunmen in Paknaan