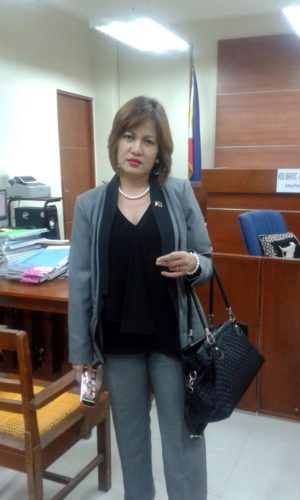 The Department of Justice (DOJ) has ordered the 90-day preventive suspension of Cebu City Assistant Prosecutor Mary Ann Castro, who is facing a series of administrative charges over her conflict with some members of the family of the late Cebu Vice Gov. Gregorio Sanchez.

Castro will not be able to receive her salaries until the preventive suspension is lifted, said Justice Secretary Vitaliano Aguirre II in an order dated Dec. 21, 2017, a copy of which was furnished to Cebu Daily News on Wednesday.

The suspension stemmed from a complaint filed against Castro before the DOJ by former Cebu Provincial Board Member Grecilda Sanchez-Zaballero, which accused the prosecutor of “notorious undesirability, dishonest and immoral or deceitful conduct, grave abuse of authority, grave misconduct, and conduct grossly prejudicial to the best interest of the service.”

The DOJ gave Castro 10 days from receipt of the order to answer the accusations.

This suspension order, if enforced, would be a third for Castro.

In June 2015, the Supreme Court suspended Castro for six months for allegedly wielding “excessive influence” after she asked the police to help her brother who complained about a defective vehicle he bought in 2001.

In July 2016, the High Court ordered the suspension of Castro for six months for filing separate petitions for annulment of marriage in two trial courts in Cebu in 2000, a violation of the “non-forum shopping” rule.

Regional State Prosecutor Fernando Gubalane yesterday said he has no knowledge about Aguirre’s suspension order and would have to verify it from the DOJ.

Cebu Daily News tried to get Castro’s reaction on the matter but she begged off from issuing a statement regarding the case, saying she has yet to receive a copy of the DOJ order.

“Di ko ka-comment ana. I do not know that complaint. (I could not comment on that. I don’t even know what that complaint is),” she told Cebu Daily News over the phone.

But Castro subsequently sent a text message to CDN saying, “I am praying for her (Zaballero) soul, and I am hoping nga malayo siya sa karma (that karma will not catch up with her).”

“I welcome the investigation, if any, since I have a very rich husband to spend all he has for his love for me,” the feisty prosecutor added.

Castro stressed that Zaballero’s brother, Leodegreco “Greco” Sanchez, had filed a motion to withdraw the petition for divorce that he filed in court.

She said Greco also gave her a Special Power of Attorney to “sell, transfer, convey, or administer any and all of his real properties in Cebu and abroad.”

“The Special Power of Attorney is more than a proof of his undying love for me,” she said.

Castro and Greco got married in an Islamic ceremony at Harold’s Hotel in Cebu City on Aug. 18, 2015.

Last December, however, the marriage was voided by Judge Samsoden Mustapha of the Shari’a Circuit Court in Pagadian City, taking into consideration the claim of Imam Najeeb Razul, the solemnizing officer, that the marriage was performed allegedly through fraud and misrepresentation.

Greco is currently detained at the Cebu Provincial Detention and Rehabilitation Center after he was arrested in July 2017 for alleged possession of two unlicensed firearms, several ammunition, and drug paraphernalia.

Lawyer Inocencio de la Cerna Jr., the spokesperson of Zaballero, expressed elation over the DOJ’s order to suspend Castro while she is under investigation.

“It is assumed that the wheels of justice is now grinding with respect to the grievances filed against respondent and the (Sanchez) family respects and upholds due process,” he said in a statement.

In her complaint, Zaballero accused Castro of using her knowledge and influence to befriend Greco and to subsequently marry him. “She (Castro) orchestrated the conversion of Sanchez (Greco) from Catholic to Muslim as well as their hasty marriage. She also demanded dowry (so) that all properties inherited by Sanchez from his father will be given to her,” she said.

Zaballero also accused Castro of filing cases against her using the letterhead of the DOJ even if these cases were not connected with the prosecutor’s official duties and functions.

Zaballero was referring to the case when Castro, accompanied by some persons, destroyed stormed the Regional Special Operations Group office where Greco’s live-in partner Maricel Raffinan Gregory was detained following the latter’s arrest in March 2016 for the charge of libel.

Castro, who filed the case, allegedly demanded to transfer Gregory to the Talisay City Police Office, which she said has jurisdiction over the libel cases.

Read Next
The legacy of Kapitan Imok