T2 to open in June; hike in passenger traffic seen 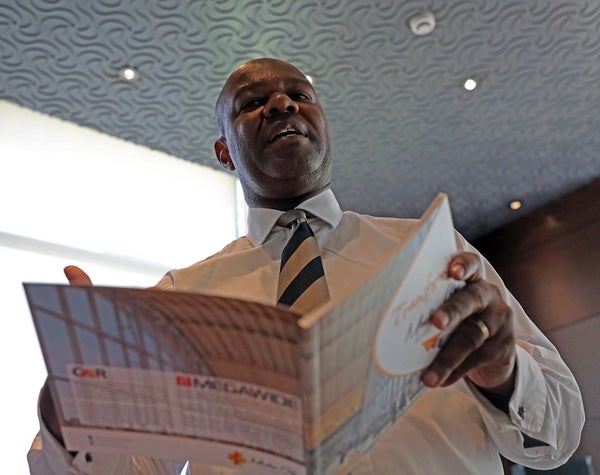 Passenger traffic in the Mactan Cebu International Airport (MCIA) is expected to exceed its already increasing records with the scheduled opening of its new Terminal 2 (T2) in the middle of this year.

GMR-Megawide Cebu Airport Corp. (GMCAC), the private operator of the MCIA, revealed that they are on track to opening the new terminal to the public this June.

Although the private operator is required to open the T2 by July 1 as stated in their concession agreement, GMCAC Chief Executive Advisor Andrew Acquaah-Harrison said they could possibly open to the public within June although there is still no final date yet.

“But all concessionaires in T2 have been told that they should be ready to operate by June 1. We just have to confirm the final date (of opening to the public),” he said during yesterday’s GMCAC Coffee Rings at Radisson Blu Cebu.

Construction of the new airport terminal is now 74 percent complete.

Once completed, the T2 is expected to cater to 4.5 million passengers annually, ideally.

It could go to as high as 6 million or even 13 million a year.

For 2017, the GMCAC has recorded increases in its passenger traffic in the existing terminal 1 which currently hosts both domestic and international flights.

GMCAC is eyeing a total of 11.2 million passenger traffic for 2018.

The number of flights also increased in the MCIA with 66,120 domestic flights and 21,440 international flights recorded in the past year.

Sought for comment, newly appointed Department of Tourism (DOT) 7 Regional Director Shalimar Hofer Tamano said the new airport terminal would boost tourism in the region which had to be anticipated and prepared for by the department.

Aside from MCIA’s T2, he said they are also gearing for the opening of the Panglao International Airport which is targeted also in the middle of this year.

“These two airports are game changers and we should be prepared. For us in the DOT, we need additional manpower, so we also need more budget. No doubt, these are game changers and these will really affect the tourism industry for the better. Bohol and Cebu are very connected in terms of tourism,” he told CDN.

Tamano explained that they currently have only three personnel in the MCIA which has to be augmented once T2 opens.

He said they also have to assign personnel at the Panglao Airport.

He added that they were instructed by Tourism Secretary Wando Teo to make sure that the necessary infrastructure is ready for the opening of these two facilities including the roads leading to the airports as well as the roads from the airports to the hotels and resorts.

GMCAC credits the growth of MCIA’s passenger traffic to its destination marketing initiatives which is their main strategy in strengthening of Cebu’s connectivity and its positioning as a gateway to the rest of the Philippines as well as a major transfer hub to other countries.

Air Juan which has landplanes coming in and out of MCIA, has flights to smaller islands in the Visayas like Biliran, Bantayan, Maasin, Sipalay, and Siquijor.

GMCAC is also beefing its penetration to the Chinese market as it launched direct flights to six destinations in China namely Beijing, Chongqing, Fuzhou, Kunming, Shanghai, and Xian in 2017.

“We had four new Chinese airlines that opened. The Chinese market is one of the emerging highest spenders in Asia and we are trying to capture that market and bring them to Cebu,” said Avigael Maningo, GMCAC corporate communications manager.

On the other hand, Pan Pacific, a Filipino airline, has started its operations last December 2017 and flies from Cebu to Seoul and Muan in South Korea.

Meanwhile, Harrison said they are on target with the construction of the T2 which they expect to be finished already by March. But it will not be opened right away

Between April to June, GMCAC will be doing trials, tests, and simulations inside the facility to make sure it is prepared for its public opening.

GMCAC branding head JR Ramos added that aside from the trials and simulations, they will also be holding site visits with different stakeholders over the same period.

“In the next couple of months leading to the June launch, we will be exposing the terminal to stakeholders starting off with the academe. We will hold school tours, invite universities and engineering students to look at how a world-class structure looks like. It’s basically a transfer of knowledge,” he said.

Aside from the academe, they will also holding site visits with hotel groups, travel groups, transport groups, and the media.

GMCAC will also open the T2’s doors to the general public ahead of the opening by holding open days where they can visit the new terminal which will only cater to international flights to and from Cebu.

Terminal 2 will span approximately 45,000 square meters and can be expanded further in its second phase.

The new terminal will serve all international flights with eight aerobridge-equipped aircraft parking stands. It will be connected by a link-bridge to Terminal 1, which will be refurbished for domestic use.