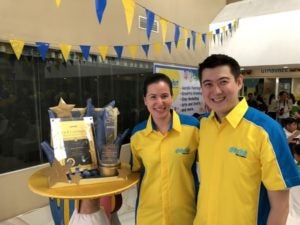 Carissa and Osmund Ko, franchise owners of Globalart Cebu, shares that the Cebu center is recognized by Globalart as among the top franchises of the brand among 600 centers worldwide.
CDN PHOTO/JOSE SANTINO BUNACHITA

Globalart Cebu made it to the Top 10 franchises of the brand that has over 600 centers in 18 countries all over the world.

Osmund and Carissa Ko, the franchisees of Globalart Cebu said they were surprised by the award as they were the only center from the Philippines that made it to the top ten.

“It was very shocking for us. We went to the international competition with all the Globalart centers in the Philippines so we were not expecting a lot. We were already happy when they said we were nominated,” said Carissa who is the manager and is also a teacher of Globalart Cebu.

They received the award in a ceremony in Malaysia last December 3.

Other franchisees who won were from countries like China, Malaysia, India, and Indonesia.

Globalart was founded in 1999 by Mahair Goh in Malaysia. Since then, they have established more than 250 centers in Malaysia alone and more than 300 in other countries including the Philippines, United States, Australia, China, India, and Singapore among others.

In the Philippines there are 16 branches mostly in Metro Manila. The only branches outside Metro Manila are Cebu, Davao and Pampanga.

The Kos manage and own the two Globalart centers in Cebu — one in the Banilad Town Center (BTC) and another in Capitol Square which only opened in 2016.

According to Carissa, Globalart decided to give an award to their top franchisees for the first time last December.

Globalart Cebu was nominated together with other branches by the Globalart headquarters in Manila.

Among the criteria for choosing the top ten franchisees were overall sales, marketing activities and overall operations.

Carissa, who is from Manila, graduated marketing and married Osmund, who is from Cebu, in 2008. Since then, she has been living in Cebu
Aside from Globalart Cebu, the couple also owns Speedtalk Language Learning Center which has been operating for 11 years already.

“We used to have art classes in Summer at Speedtalk and then some parents started asking us to continue it. So when I heard of the Globalart franchise in Manila, we wanted to have it,” she said.

She recalled that back then when they met the master franchiser in Manila, an Indonesian married to a Filipino, they initially did not want to have more franchises. But Carissa said they insisted and eventually convinced her especially since they were already established in the education business.Globalart Cebu currently has seven teachers with Carissa and Osmund also teaching at times.

Most of their students are children of Koreans and Japanese although there are also Cebuanos.