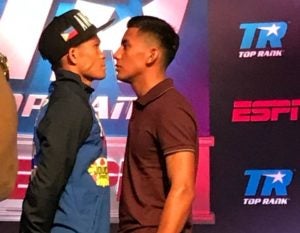 Corpus Christi, Texas—Israel Gonzalez tried to get inside the mind of Jerwin Ancajas in their faceoff Thursday afternoon, but the scare tactic backfired.

The Mexican challenger moved uncomfortably close, about an inch within, and threw a dagger look at the Filipino champion after the press conference of their tussle for the International Boxing Federation (IBF) junior bantamweight crown on Saturday night (Sunday in Manila) here.

Though surprised by the sudden change in demeanor of Gonzalez, Ancajas did not blink. He gazed back and, after a few tense seconds, the Mexican dropped his stare first and offered a handshake.

Ever a gentleman, Ancajas accepted before they headed back to their respective teams at Brewster Street Ice House, just a few blocks away from Holiday Inn Downtown Marina where they were both billeted.

“He got too close and it looked like he wanted to eat me,” said Ancajas in Filipino. “Maybe he’s trying to play mind games, but I didn’t bite. He’s just trying to psyche me out.

“I have Filipino pride, we’ll know who’s the better man in the ring,” added Ancajas, who’ll be defending the 115-pound crown for the fourth time Saturday night (Sunday in Manila) at the 10,000-seater American Bank Center.

Though he was unable to intimidate Ancajas, Gonzalez at least succeeded on getting the attention of the 26-year-old pride of Panabo City.

“His eyes were a reflection of his determination to clinch my crown,” said Ancajas. “But it’s not for the taking.”

According to Ancajas, he didn’t feel any pressure about the title fight itself, but the comparison being drawn with him to Manny Pacquiao, the eight-division world champion, Philippine senator and his benefactor.

For his part, the 21-year-old Gonzalez said he intends to take advantage of the title crack and bring pride and joy to his family and supporters in Los Cabos, Mexico, which has yet to produce a world champion.

Gonzalez told Philippine media on Wednesday that he and his trainer Adalberto Sanchez have thoroughly studied videos of Ancajas’ last few fights, saw some flaws, and are going to pounce on them come fight night.

While Ancajas and trainer Joven Jimenez hardly found a video of Gonzalez in action, they said the challenger and his handlers will be in for a surprise.

Ancajas mostly used 1-2 combinations in knocking down Jamie Conlan four times and knocking the Irish out in the sixth round in Belfast last November.

This time, Ancajas will be unloading more punches — 3-4-5 combinations — to bring down Gonzalez’s defenses.

In trying to look mean and tough during their stare down, Gonzalez may have only roused the tiger within Ancajas.

And when the Mexican wiggled out of the eye contact first, Ancajas already figured him out.