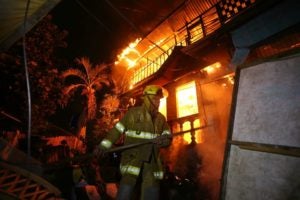 A fireman trying to put out the fire in Barangay Quiot.
(CDN Photo/Lito Tecson)

At least 50 houses were razed in a fire that hit Sitios Beltran and Upper Yati in Barangay Quiot, Cebu City on late Monday afternoon.

SFO2 Lowel Opolentisima of the Bureau of Fire Protection said that the fire started at the house of Carlito Dayanan and quickly spread into the neighboring houses.

Opolentisima estimated the damage caused by the fire at P500,000.

Opolentisima said that they were still looking into what really caused fire.

Read Next
Statement of the Young Lawyer’s Association of Cebu, Inc. (YLAC) on the killing of Atty. Jonnah John Ungab