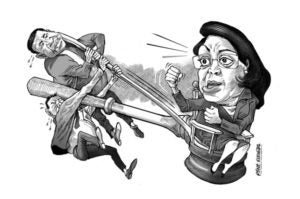 Presidential Spokesperson Herminio Roque Jr. went on national television to say he hoped Chief Justice Maria Lourdes Sereno, whom her Supreme Court (SC) associates forced to go on leave, would use her time away to think about what is best for the country.

He also said he hoped Malacañang would not be accused of pulling strings to ensure the removal of the High Court’s leader.

Rep. Reynaldo Umali, chair of the House Justice Committee, also said the Chief Justice should consider resigning for the good of the nation.

Umali insinuated that Sereno has lost authority among her peers as shown in their acrimony towards her.

Who are they kidding?

Are they really after the nation’s good?

In August 2016, President Rodrigo Duterte warned Sereno against meddling in his release of names of alleged narco-judges after she called it premature.

“I’m giving you a warning. Don’t create a crisis because I will order everybody in the executive department not to honor you,” said the President.

September 2017, Umali’s justice committee, composed mostly of allies of the President, found sufficient in form and substance a complaint filed by lawyer Lorenzo Gadon based on a highly questionable claim of personal knowledge of the facts of his accusations.

In October 2017, the President challenged the Chief Justice and the Ombudsman to resign with him after accusing Sereno of not filing her statement of assets, liabilities and net worth — a document required of public officials — when she was in private practice.

In December 2017, the SC ordered the government to submit police records on drug-related deaths linked to Duterte’s platform centerpiece — the crackdown on narcotics.

Only the Pollyanna will keep believing that was not a realization of Duterte’s threat to legitimize executive defiance of a co-equal branch of government of which Sereno is not only a part but the duly appointed and inducted head.

In February, Alvarez floated the possibility of Calida, a non-legislator, seeking the invalidation of the Chief Justice’s appointment.

March has come with Oliver Lozano, a lawyer to the President’s much-loved Marcos family asking the SC to void Sereno’s appointment.

“I call upon Chief Justice Sereno to really consider resigning only to spare the institution from any further damage,” Roque had said in November last year.

No, really, there is no concerted effort to unseat the Chief Justice.

Read Next
Passion for politics and the TINGOG Carolinian Party