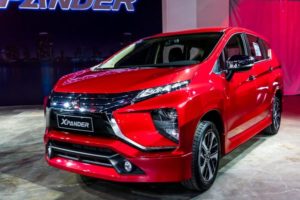 The all-new Mitsubishi Xpander during its launch at the World Trade Center in Pasay City.
motioncars.inquirer.net

Mitsubishi Motors Philippines Corp. (MMPC) gave Filipino auto enthusiasts a more thorough look at the newest addition to its lineup when it unveiled the all-new Xpander at the World Trade Center in Pasay City over the weekend.

The all-new Xpander is a seven-seat compact multipurpose vehicle aimed squarely at a new generation of car buyers upgrading from a B-segment vehicle to a larger one, with a need for more than five seats. It is expected to compete with the Honda BR-V/Mobilio, the Suzuki Ertiga, the Toyota Avanza and the upcoming Toyota Rush.

During its launch, MMPC also revealed the different variants and their prices.

Prices in Cebu, according to Mitsubishi’s Cebu dealer Fast Autoworld Philippines Corp., start at P925,000 for the entry level GLX manual and the top-of-the-line GLS Sport automatic pegged at P1,125,000.

According to MMPC, deliveries start in May, with order books now open through Mitsubishi dealerships nationwide.

The Xpander is the succesor the Mitsubishi Adventure and Fuzion which have been retired, and replaced with a single, simple platform.

The Xpander is built atop an all-new platform, utilizing a transverse front-engine, front-wheel drive layout. Power comes from an all-new 1.5 liter MIVEC equipped 4-cylinder engine (code named 4A91) that meets the stringent Euro IV emissions. Output is a modest 105 horsepower and 141 newton-meters of torque. It is paired with either a five-speed manual or four-speed automatic transmission.

The Xpander is built at Mitsubishi Motors Corp’s facility in Bekasi, West Java.

Read Next
Two of a kind: crossovers versus pick-up platform Sport-Utility Vehicles