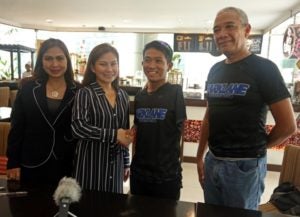 IF THE Cebuano community was able to rally behind embattled Cebuana marathoner Mary Joy Tabal and helped her qualify to the Rio de Janeiro Olympics in 2016, the Cebu Parklane International Hotel believes this can be done again to help one of the members of its Para Triathlon team.

Inspired by the Tabal story, Cebu Parklane International Hotel is now hoping that the Cebuanos can help 29-year-old Alex Niño Silverio make it to the 2020 Paralympics that will be held in Tokyo, Japan.

Tabal was in danger of missing her chance at the Olympics when she was removed from the list of National Team members by the Philippine Amateur Track and Field Association (Patafa) though time was good enough for her to qualify for the quadrennial meet in 2016.

With the help of Cebuano support on social media, Tabal was reinstated and was able to compete in Brazil, making her the first Filipina to race in the Olympic women’s marathon.

“The Cebuano community rallied behind Tabal. So, let’s do it for Alex also,” said Parklane Para Tri Team manager Bobby Martinez in a press conference yesterday at the hotel.

The team has much confidence on Silverio, who, at 23 years old, lost his entire left arm due to a motorcycle accident in his hometown in Compostela town, north Cebu.

Parklane has allocated P200,000 for Silverio’s expenses that include training and joining races but according to Manguilimotan, this will not be enough to cover all the races he needs to join. This is why they need the help of the Cebuano community.

“We really see potential in him that is why we will do our best to help him reach his Paralympic dreams,” said.

The ParaTriathlon Association of the Philippines (PTRAP), the governing body for paratriathlon for the Philippines, will also help in Silverio’s Paralympic bid but it will still not be enough to take care of the expenses during training and competition.

Silverio showed his potential after placing fifth in his first full triathlon race last year in the SanRem 80/80 under the 20-29 age category. He competed in the sprint distance (750-meter swim, 20k bike and 5k run), which is also the Paralympic triathlon distance.

Silverio’s first crack at ITU points is the Mount Mayon ASTC Asian paratriathlon championships this August, where 450 points is at stake for the champion.

“I am very thankful to Parklane for the support they have given to me,” Silverio said. “I will work hard for this so that I can qualify.”

Read Next
Another southern gem recruited by Tamaraws