BACK IN BOGO CITY 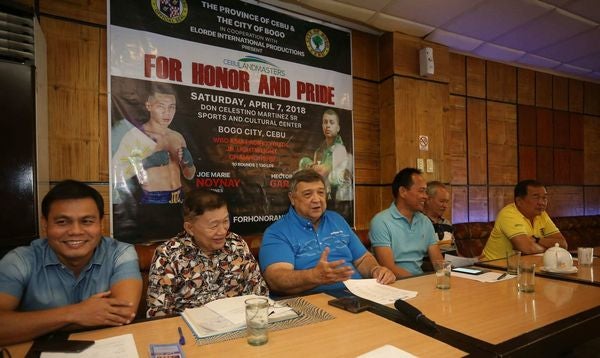 The City of Bogo is set to organize a boxing event on April 7 at the Don Celestino Martinez Sr. Sports and Cultural Center in Bogo City.

This will be the first time in 10 years that a boxing event will be held in this northern city of Cebu province.

“It has been 10 years since the city of Bogo was able to organize a fight,” former Bogo City Mayor Junie Martinez said in a press conference yesterday at the Rajah Park Hotel. “Through this fighting event, we [hope we] can bring the boxing hype in [back in] Cebu.”

The 22-year-old Noynay has a record of 13 wins, two draws and one loss. He has four wins by knockouts.

At stake for this 10-round fight is the WBO Asia Pacific Youth Jr. Lightweight title.

Other Elorde Internationals Promotions boxers who are expected to see action in this fight are WBC ABCO Continental Flyweight Champion Cris Alfante from Zamboanga, who will be facing Renoel Pael of Barangay Inayawan, Cebu City, in the 10-round preliminary fight, Cris Paulino, Ricardo Sueno, Ronel Sumalpong, Alvin Medura and Machieka Pareno.

“The undercards are not final yet. We are targeting up to nine bouts. We still have six so we will be looking for more,” event matchmaker Willy Flores said.