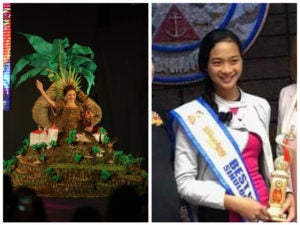 It turned out that the festival queen of Daanbantayan, who wore an entire mountain with nipa huts, is not the winner of the 2018 Best in Sinulog Festival Costume award.

The rightful winner, based on tabulation records, was Mary Faith Voz Libres, the festival queen of Tribu Katbalaugan of Catbalogan City, Samar.

Libres, who finished as first runner-up in the competition, wore a futuristic-themed creation of silver and white colors designed by Lyndon Adolfo.

The error was discovered when Catbalogan City officials claimed the cash prize at the Sinulog Foundation Inc. (SFI) office on January 21 and discovered that the check amounting to P10,000 was under the name of their festival queen.

In response to their query, Hurtado showed a letter from Ballesteros who said that the “Best in Costume (wearer)” award was not announced during the coronation night, January 19.

“But we reviewed the footage and the awards for Best in Festival Costume and Best in Costume Design were handed to Daanbantayan,” said Hurtado.

A separate letter signed by Tumulak and addressed to Mayor Stephany Uy-Tan invited their festival queen to attend the Photo and Film Awarding last February 11 where she will be awarded the “Best in Costume” award.

Hurtado, however, said that they declined the invitation because they wanted a full explanation of the incident.
He said they also reviewed the footages of January 19 coronation night and discovered that both awards were handed to Daanbantayan.

Hurtado said they waited for a response from SFI after sending another letter dated February 27 this year.

“He was very apologetic and told me that they will publish an apology on the newspaper to set the record straight. Mr. Dela Cruz also said he will personally visit Catbalogan to hand over the sash and the trophy,” said Hurtado.

He also brought the tabulation sheets which he showed to Mayor Uy-Tan and Hurtado for transparency of the Sinulog Festival Queen results.

Hurtado said they also received additional P10,000 cash from SFI, which was turned over by dela Cruz.

Tribu Katbalaugan’s Facebook page posted a letter with SFI letterhead that was signed by dela Cruz and addressed to Mayor Uy-Tan.

“The Sinulog Foundation, Inc. (SFI) extend its sincerest apology for the very unfortunate incident and its regrettable consequences to the City of Catbalogan and its people,” the letter read.

In the letter, dela Cruz explained that there were two categories pertaining to the contestants’ costumes: Best in Sinulog Festival Costume and Best in Costume Design.

“The tabulation results showed that the Municipality of Daanbantayan, Cebu won the Best in Costume Design while the City of Catbalogan won the Best in Sinulog Festival Costume category,” dela Cruz explained in the letter.

Dela Cruz, on behalf of SFI, explained that human error coupled with “less stringent procedures” resulted to Daanbantayan being awarded the Best in Sinulog Festival Costume award instead of Catbalogan.

The letter also noted that the event was managed by Victor Hao Cuenco Productions.

“SFI assures your city that this matter is being taken seriously. Measures have been taken to let persons responsible take full accountability of their mistakes and its consequences,” he said.

“The foundation is also reviewing existing procedures and protocols to ensure that the incident will never happen again,” added dela Cruz.

Hurtado, however, said that Tribu Katbalaugan will not be joining the Sinulog festivities next year.

“It is not because of the recent mishap. We already announced earlier, even before this issue happened, that we will take a hiatus from our Sinulog participation because we have plans to participate in an international cultural festival that is happening soon,” explained Hurtado.

In the Sinulog 2018 competition, Tribu Katbalaugan won 1st runner-up in the Street Dancing competition and a 2nd runner-up finish in the Free Interpretation (FI) category.

2018 is the fourth year for Tribu Katbalaugan to participate in the Sinulog Festival.