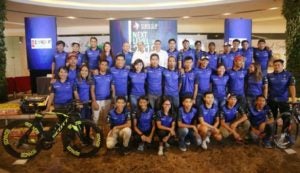 Members of the Rider Omega Pro Triathlon Team together for a photo opportunity during the Next Level in 2018 team launching at the Robinsons Galleria Cebu.
CDN PHOTO/LITO TECSON

The multi-titled Rider Omega Tri Team officially forged a partnership with the Triathlon Association of the Philippines (Trap) to focus on the development of grassroots triathlon in the country.

During its annual team launching yesterday at the Robinsons Galleria Cebu, Rider Omega Tri Team announced that starting this year, they will help Trap in scouting triathletes with potential and help developed them in the hopes of producing representatives for the country in various international races such as the Southeast Asian Games, Asian Games and the Olympics.

“This is an open-ended agreement between Trap and Rider Omega Tri Team because we have the same shared values towards the will to go on sourcing and developing young and potential triathletes to represent our country in the future,” said Carassco.

Carassco said Trap will help recruited triathletes receive full financial aid, and all the necessary support once they are selected to become part of the national team.

As part of their partnership with Trap, Rider Omega will allow national team members of triathlon to train alongside its triathletes anytime of the year.

Rider Omega Tri Team and Trap actually have an existing partnership but was not highly publicized and a product of that collaboration is 14-year-old Karen Andrea Manayon of Talisay City.

Manayon has won numerous races last year representing both Rider Omega Tri Team and Trap as one of its members of the youth triathlon team. She received the Tony Siddayao award last February 25 in the Philippine Sportswriters Association (PSA) awards in Manila for her achievements in triathlon last year.

She is expected to take part in a two-month training stint in Portugal along with two other candidates of the Philippine team for the Youth Olympic Games in Buenos Aires, Argentina this October.

“Our organization is here not for money making or fame. We are here to give opportunities for talented triathletes to represent not just our team but our country as well. We are very open to welcome new members at the same time recruit young potential triathletes through our grassroots program as part of our commitment to our partnership with Trap,” said Paul Jake Castillo.

Meanwhile, the team is expected to compete in around a dozen triathlon races this year, including the Alveo Ironman 70.3 Davao this March 25 and the Regent Aguila Ironman 70.3 Philippines in Cebu on August 5.

The team recently won the overall title of the Bike King Tri in Subic Bay, Zambales.