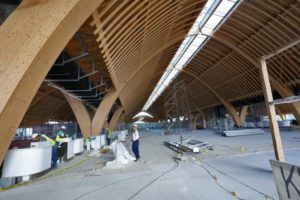 The new Terminal 2 of the Mactan Cebu International Airport (MCIA) is expected to be operational in June this year.
CDN PHOTO/JUNJIE MENDOZA

GEARING UP FOR T2 OPENING

Developers of condominium projects in Cebu are encouraged to position themselves as options for tourists that stay for the short-term here.

Joey Bondoc, Colliers International Philippines research and management head, said this amid the June opening of the new Terminal 2 (T2) of the Mactan Cebu International Airport, which is expected to bring in an influx of foreign tourists to Cebu.

Bondoc said this could be a way for developers to get a share of the foreign tourist market in Cebu, especially in the second half of the year when the airport’s Terminal 2 would be open for business.

“We suggest that developers build more residential projects that are leisure and lifestyle-oriented in anticipation of increased interest brought about by the infrastructure improvements,” he said in a briefing with reporters in Cebu last Wednesday.

“Already, we have seen some developers incorporate the resort-type feel in their projects to differentiate their products,” Bondoc added.

He said the most common of these are the condotels where condominium units are being leased as hotels in order to accommodate tourists coming to Cebu.

“The developers and operators (of condotels) should also offer water activities such as island hopping and kayaking. It is also important that developers add meetings, incentives, conferences, and exhibitions (MICE) facilities especially for areas like Cebu being marketed as business and leisure hubs,” he said.

In Metro Manila, Bondoc noted that there has been huge take-up of condominium units especially in the bay area and these are mostly from the Chinese market.

For Cebu, he said the foreign tourist market is also driven by Koreans, Japanese, Chinese, Singaporeans, and those from Hong Kong.

He said there are some of these tourists that come to Cebu initially for vacation, but eventually they decide that they want to come back more often so they take into consideration buying condominium units so they can have a place of their own to stay in.

“If they visit the Philippines again, they just stay there. It’s because they enjoy the Philippine lifestyle, the culture and the environment here,” he said.

Bonjoc said that vertical developments like condominiums would be expected to continue flourishing in Metro Cebu and would outpace horizontal developments.

According to the latest report of Colliers for the first quarter of 2018, the condominium stock in Cebu totals 33,400 units all in Metro Cebu. This complements over 27,000 house and lots across Metro Cebu.

This has been driven by the increasing land prices in Cebu, the report said.

The condominium stock is largely concentrated in Cebu City at 73 percent or over 24,500. It is followed by Lapu-Lapu City with 6,100 units (18 percent), while the remaining is in Mandaue City.

The total take-up of condominiums in 2017 reached 5,600 units, consistent with the average in the prior three years of 5,500 units.

On the other hand, house and lots recorded total take-up of 2,100 units, slower than the average of 3,800 units in the last three years.

“Colliers attributes this increase in preference for vertical projects to (1) the increasing land values which have forced developers to focus more on vertical developments, and (2) the proximity of condominiums to the central business district, enhanced by the worsening traffic situation in Cebu, making them the choice of Cebuanos and investors alike,” the report said.

This is why they said there have been fewer house and land developments launched in recent years. While horizontal developments saw a slight increase in launches from 1,200 units in 2016 to 1,600 in 2017, it is still slower than the three-year average since 2013 of 3,500 units annually.

Launches of condominium developments, on the other hand, while also declining, still reached over 3,000 units in 2017. This is about 150 percent more than the number of house and lots launched.

Colliers also pointed out that house and lot developments in Cebu have also expanded outside of Metro Cebu. Some of the key horizontal projects launched between 2015 to 2017 are located in Talisay, Consolacion and Minglanilla.