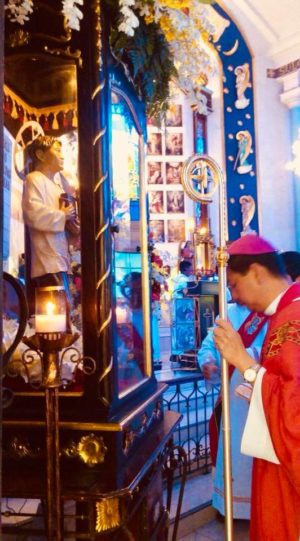 Like San Pedro Calungsod, be ready to teach about the Christian faith amid threats to marriage and family.

This was the message of Cebu Auxiliary Bishop Dennis Villarojo as Cebuanos on Saturday marked the feast of Saint Pedro Calungsod, the first Visayan martyr.

Villarojo presided over the 9:30 a.m. Mass at the Cebu Archdiocesan Shrine of San Pedro Calungsod along D. Jakosalem Street in Cebu City.

This year’s feast is the sixth since Calungsod was canonized and invoked as a saint.

In his homily, Villarojo discussed the dangers of a bill that seeks to legalize absolute divorce and dissolution of marriage in the country.

He said the controversial bill is a direct affront to the God’s words that clearly prohibited divorce.

“Our Lord, in the scriptures, was very clear about it. He said that ‘from the beginning, God made them male and female and for this reason, a man shall leave his father and mother and be joined to his wife, and the two shall become one flesh.’ Therefore, what God has joined together, let no man put asunder,’” Villarojo said in reference to the words of Jesus Christ in the Gospel of St. Matthew.

“Divorce directly contravenes and attacks God’s very words. It is therefore evil,” he added in Cebuano.

Villarojo said some legislators claim that divorce will address marriage woes, particularly those who suffer from abusive spouses.

But the bishop believed otherwise.

“If a column or post in your house is damaged by termites, will that be a reason for you to destroy the entire house? Perhaps, you would find ways to get rid of those termites or fix the column instead of destroying the entire house. The same goes with marriage,” he said.

“If marriage life is getting worst, we have remedies such as legal separation or if the marriage was found out to be defective right from the very start, there’s an annulment. But divorce is never an option,” he added.

The lower House last Monday passed on third and final reading the proposed divorce bill. Two lawmakers abstained from voting in the approval of House Bill 7303, or “An Act Instituting Absolute Divorce and Dissolution of Marriage in the Philippines.”

A total of 134 congressmen voted for the bill, 57 opposed, while two abstained.

But even before the bill is submitted to the Senate, some members of the upper chamber already expressed opposition to the divorce bill.

Despite a failed marriage, President Rodrigo Duterte also does not approve of divorce in the Philippines, saying it would be bad for the children of separated parents.

The Philippines and the Vatican are the only two places in the world where divorce is not allowed.

Just in case divorce will be legalized in the Philippines, Villarojo said the Church will continue to implement what God has taught.

“If you are married in church, there is no such thing as divorce. So, if you’re thinking that marriage is just like a game, think twice before marrying in church because what has been preached will never changed. Marriage is forever because it is blessed by God,” he explained.

Villarojo advised those who prefer civil wedding not to immediately believe the words “till death do us part” in their oaths.

“Because in civil wedding, you know that it can be dissolved. We might as well change the formula from ‘until death do us part,’ to ‘for a certain period only,’” he quipped.

“If you are really serious about marriage, do it, not just by man’s law, but by Gods. Let us go back to the will of God where order and serenity comes from. God’s law is written in the hearts and conscience of every human being,” he added.

Villarojo called on the faithful to emulate Calungsod, who along with Jesuit priest, Fr. Diego de San Vitores, preached the truth to others amid various hostilities.

“May we be ready to teach and mold especially our young people, to offer ourselves for the sake of truth and the salvation of souls,” he said.

Calungsod was killed by angry men in Guam, along with Fr. Diego de San Vitores, on April 2, 1672, for catechizing and baptizing the natives.

Hundreds of people trooped to Calungsod’s archdiocesan shrine which was built in 2002 in honor of the Visayan martyr.

Calungsod’s liturgical feast day is originally celebrated on April 2, the day of his death.

This year, however, the Archdiocese of Cebu moved the feast a day earlier since April 2 falls on Easter Week which cannot be impeded by any other celebrations.

Calungsod was beatified by St. John Paul II on March 5, 2000. Out of the 44 persons who were beatified on that day, only Calungsod advanced to be declared a saint on Oct. 21, 2012.

And of the seven saints who were canonized by Pope Benedict XVI on Oct. 21, 2012, only Calungsod has an image, in the form of a mosaic, inside St. Peter’s Basilica in Rome.

Calungsod is the second Filipino saint after Lorenzo Ruiz de Manila who was canonized in 1987.

Read Next
Beyond the hour: Home and office Energy-saving tips