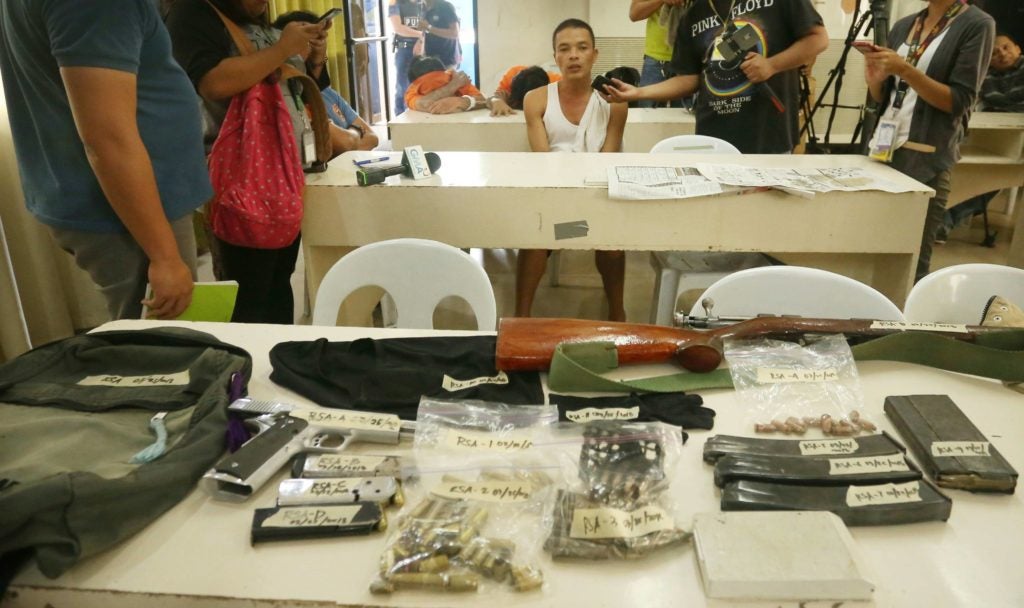 He barely survived a random shooting eight years ago and to this day, the attack fueled Roland Arita’s hatred of criminals.

“Suko gyud ko sa dautan nga mga tawo. (I am really mad at evil persons),” he said while showing the scar of a bullet wound on his neck.

The 38-year-old Arita was arrested by police in Barangay Pulangbato, Cebu City last Sunday after he allegedly shot dead drug suspect Eric Pedrosa Manzo. Arita admitted to killing Manzo and showed no remorse in doing so.

“Gusto ko magbasol pero yawa man. (I wanted to be sorry for it but he was an evil person),” Arita said in reference to Manzo, who faced both charges of illegal drugs and firearms possession.

Arita said Manzo was the second person he killed. Last February 17, he said he also shot down a certain Florencio Leyson who was allegedly responsible for the death of his uncle.

“Angkonon gyud ni nako ang akong gipangbuhat. (I will really confess everything I did (in court),” said Arita who also confessed to have used illegal drugs for some time before he purportedly stopped over a year ago.

Arita, a farmer living in the mountain village of Adlaon in Cebu City, said there were people who complained to him about certain criminals in their place.

He said he promptly acted on it and conducted surveillance on these criminal suspects. Last Thursday, Arita said he was supposed to just spy on Manzo, but Manzo allegedly tried to hack him.

“Nakalihay man ko so nibunot ko sa akong armas og ako siyang gipusil. (I was able to evade so I got my gun and shot him),” he said. If he was not arrested by the police, Arita said he would still go after the bad guys and kill them.

“Gusto ko motabang sa mga polis kay naglagot man ko sa mga badlongon. Mapriso na sila, makagawas ra man gihapon. Maayo pa og patyon. (I want to help the police get rid of criminals because I am mad at these lawless elements. Even if they get jailed, they will still find their way out so it would be better to kill them)” he said.

Arita said no one paid him to kill suspected criminals. “Ako lang ni. Ako lang ni nga mission. (I do this on my own. This is my mission),” he said. Seized from Arita were an improvised rifle and several ammunitions. He will face charges of murder and illegal possession of firearms.

Arita, along with two alleged gun-for-hires were presented by the police, in a press conference on Monday.

They were paid P45,000 by a certain Archie to kill Tañajura who allegedly did not remit proceeds of illegal drugs sales. “Gipit man ko sa kuwarta so akong gidawat ang trabaho. (I did not have enough money so I accepted the task),” said Montes.

But police said it was not the first time Montes killed someone. Senior Supt. Joel Doria, Cebu City police chief, said Montes was accused of killing his own father, Allan, in Barangay Ermita, Cebu City on March 31, 2015.

The following year, on Nov. 11, 2016, Montes was tagged in the killing of a certain Bryan Benitez along D. Jakosalem Street in Cebu City. The 17-year-old companion of Montes has no criminal records prior to Tañajura’s shooting.

“The arrest of these assailants would just prove we, policemen, are doing our best to solve the murder cases here,” Doria said. While the killings didn’t have any pattern, he said there were instances when members of drug syndicates killed each other.

“If the police have an internal cleansing, these drug groups also have their own cleansing. In fact, based on the information we received, they (Montes and 17-year-old suspect) were preparing to assassinate another target supposedly in the coming days),” Doria said.

Since February 17, at least 49 persons were killed in separate occasions in Metro Cebu. So far, investigators were able to arrest the alleged perpetrators in three of these murders.