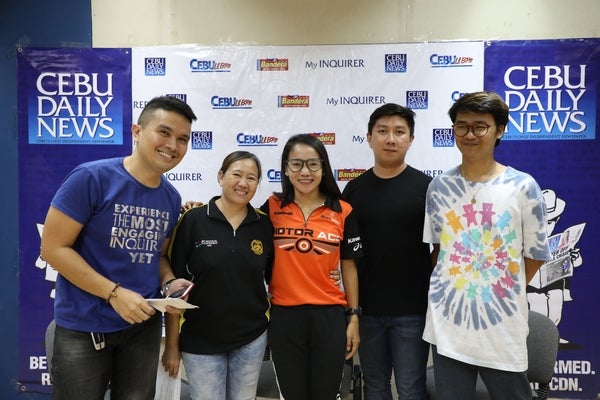 Cebuana Olympian Mary Joy Tabal underscored the role of Cebu’s sportswriters on her road to success after she was named Athlete of the Year during the 36th Sportswriters Association of Cebu-San Miguel Brewery (SAC-SMB) All-Cebu Sports Awards yesterday at the atrium of Robinsons Galleria Cebu.

Tabal bagged the so-called mother of all awards for her stirring exploits in long distance running, both on home soil and on foreign shores. She capped what had been a banner year by producing a gold medal for the Philippines in a marathon event during the Southeast Asian (SEA) Games in Malaysia and for completing a historic five-peat in the Milo National Marathon.

Tabal’s record-setting triumph in the Milo Marathon was a bittersweet one as she learned of her father’s death barely 24 hours before what she later described as the toughest race of her illustrious career that brought her to the prestigious marathons in Boston, London, and Paris.

“I am very honored and humbled to be receiving this award,” Tabal said during her acceptance speech. “Let me start by sharing to you my humble beginnings and how these sportswriters have played an important role leading to where I am now,” added Tabal, who made history by being the first Filipina marathoner to make the Olympics two years ago in Rio de Janiero, Brazil.

Tabal vividly recalled that when she started shifting from being a sprinter into a long distance runner way back in 2009, she had a simple dream, which was to make headlines in the newspapers.

“Way back 2009 when I started to shift from a sprinter to a long distance runner, I had this simple dream, because even winning or being in the podium in shorter distances like three-kilometer and 5K [races], my name in the newspaper was little. Sometines, it wouldn’t even be mentioned,” she said. “So I dreamt that one day, I would make the headline with an accompanying picture of me.”

In just a short span of time, she lived that dream.

“It was September 9, 2009 when I joined my first 10K race and I collapsed at the finish line. Never did I expect that I was going to make the headline after because I didn’t win. I did finish at fifth place but what made me really happy was seeing a photo of me on a newspaper. Even if I collapsed in the picture, for me I achieved my dream and I was happy at that time. So, that’s where I started.”

Tabal gamely admitted that the stories written about her are not all good. There are times that it broke her heart, but she takes it as a challenge and eventually as a ladder to success.

“It’s more on giving challenges to yourself. If not for the media, we wouldn’t strive harder with my competitors and we wouldn’t improve. I am just very lucky that I am surrounded with good people who influenced me to do good. I am sharing to you this because we are all athletes here, so be prepared with that,” Tabal added.

Aside from Tabal, also honored were Jean Henri Lhuillier as “Sportsman of the Year” for his invaluable contribution to the development of tennis and batted sports in the country, orthopaedic doctors Antonio San Juan and Roel Dejaño as ORLACSAN Memorial awardees for rendering their services to injured athletes and those needing rehabilitation for free most of the time, and Kamagayan FC founder Rico Ramirez as Presidential awardee for his dedicated efforts in developing football talents especially the indigent kids.